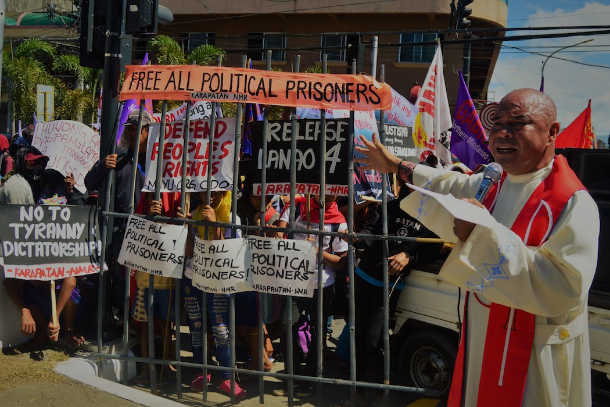 Father Rolando Abejo of the Philippine Independent Church leads a demonstration in Cagayan de Oro City in Mindanao on Dec. 10 to protest alleged human rights abuses due to military rule in the southern Philippine region. (Photo by Jigger Jerusalem)

The southern Philippine region of Mindanao and its approximately 25.5 million population will remain under military rule for another 12 months, or until the end of 2019.

A joint session of Congress on Dec. 12 approved a request by President Rodrigo Duterte to extend martial law across the region.

Voting 235 in favor, 28 against, and with one abstention, the country's senators and congressmen also extended until Dec. 31, 2019, the government's ability to arrest "persons of interest" without a warrant.

Duterte had asked Congress for the martial law extension, claiming that terrorist groups were still recruiting members and carrying out violent acts in Mindanao.

Congress has already extended martial law twice this past year due to reported violence in the southern region.

Duterte initially declared martial law in Mindanao on May 23, 2017, after Islamic State-inspired gunmen attacked the city of Marawi resulting in a five-month siege that displaced close to half a million people.

The president earlier said extending martial law again will enable the military and police to finally put an end to an ongoing insurgency in Mindanao.

Philippine lawmakers approve the extension of martial law across in Mindanao until the end of 2019 on Dec. 12. (Photo by Jire Carreon)

While martial law in Mindanao was being extended, human rights groups warned of abuses being committed by soldiers.

Father Rolando Abejo of the Philippine Independent Church, regional head of the Movement Against Tyranny in northern Mindanao, said at least 567 people have received threats and were subjected to harassment and intimidation by soldiers in his area alone.

The priest also claimed that at least four people were killed, another four became victims of enforced disappearances, and 43 were victims of illegal arrest and detention.

"Notably, the victims are farmers and indigenous peoples whose lands are red-flagged and whose communities are vilified as rebel members or supporters," said Father Abejo.

He said most of the targets of military harassment are people in communities where the government wants to set up mining and plantation projects.

"The [government] shows no sign of remorse and is hell-bent on taking down all its 'enemies' at the expense of human rights," said the priest.

Legislators from across Southeast Asia have warned that extending martial law will put human rights at risk in Mindanao.

"The continued imposition of martial law threatens to facilitate a culture of impunity," said Charles Santiago, a member of the Malaysian parliament.

Santiago, who is chairman of the ASEAN Parliamentarians for Human Rights, called on Philippine authorities to conduct effective investigations into all allegations of human rights violations.

He also noted a "marked increase in human rights violations" in Mindanao over the last year and a half.

The Philippines' military, meanwhile, welcomed the "overwhelming vote of confidence" from legislators and the "strong support of the Filipino people" for the martial law extension.

In a statement, Defense Secretary Delfin Lorenzana said the military "will continue to uphold its mandate of ... protecting the democratic way of life of our people, with full respect for human rights, international humanitarian law, and the primacy of the rule of law."