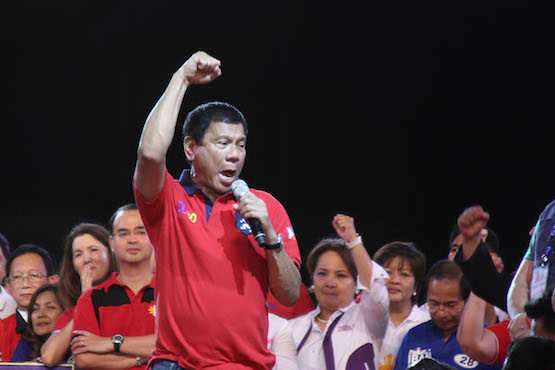 Rodrigo Duterte, the controversial 71-year old mayor of Davao City, wins the Philippine presidency by a clear margin following the country's national elections on May 9. (Photo by Vincent Go)

A controversial town mayor, dubbed "Dirty Harry" and "The Punisher" for his tough stance on crime, won the Philippine presidency by a clear margin following the country's national elections on May 9.

"It's with humility, extreme humility, that I accept this, the mandate of the people," said Rodrigo Duterte who has ruled as mayor of the southern city of Davao in Mindanao for the past two decades.

The 71-year old drew the wrath of Catholic bishops last year after cursing Pope Francis for causing a traffic jam in Manila during his visit to the Philippines in January 2015.

Duterte also came under fire over comments made at a campaign rally about the rape and murder of 36-year-old Australian missionary Jacqueline Hamill in 1989.

Several Philippine church leaders called on the faithful not to vote for the fiery mayor who vowed to kill criminals and corrupt officials once elected into office.

Archbishop Antonio Ledesma of Cagayan de Oro City blamed Duterte for the extrajudicial killings of some 1,424 individuals in Davao City during his term as mayor.

Priests, nuns and Catholic lay organizations even urged the faithful not to vote for the mayor.

Duterte, however, shrugged off the criticisms.

"Let this election be a sort of a referendum, a sort of a plebiscite for the church and me," he said.

"They say it would be a sin to vote for me. Good. If I lose I will not die. You should listen to the bishops not to vote for me. That's right. Anyway, I don't believe in the bishops," said Duterte in one of his campaign speeches. A group of nuns look for their names on the voters' list during the May 9 Philippine national elections. (Photo by Angie de Silva)

Duterte's victory proved that Filipinos, the majority of whom are Catholic, are looking for "quick-fix solutions" to widespread poverty and crime, observers said.

Benedictine Sister Mary John Mananzan, who has been in the forefront of human rights advocacy in the Philippines, said Filipino Catholics "put all the ethical principles they held all their life on hold" when they voted for Duterte.

"The next six years is a challenge for the church to be more prophetic while fighting injustices and violations on the rights of every human being," said Sister Mananzan.

"We have to be vigilant ... you cannot implement what you want without due process," she told ucanews.com.

Bishop Roberto Mallari, chairman of the Episcopal Commission on Catechesis and Catholic Education, said he wants to know "how Catholics can justify voting for a candidate with [human rights] issues."

Jayeel Serrano Cornelio, a sociologist at the Jesuit Ateneo de Manila University, said "the biggest concerns of people are corruption, drugs, and crime."

"Many people desire an iron fist or whatever it takes to confront everyday problems of peace and order," he said.

Cornelio said Duterte's statements can also be seen as "figurative speeches that say more about his strong-willed character than his actual ability to murder."

Political analyst Inday Espina Varona, a Duterte critic, said many Filipinos see Duterte as their "defense against an epidemic of criminality."

"Part of the equation is their belief that crime doesn't exist in a vacuum, is not a matter of individual perversion, but an evil landscape watered by the profits of corruption," said Espina Varona.

She said most Filipinos see crime as just "one more turf on which corrupt government officials gain the economic clout to perpetuate themselves in power."

"So they see the tough anti-crime stance as a challenge to the most evil sections of the elite. It is to many a defensive war," Espina Varona said.

Human rights activist Carlos Conde, also a staunch critic of Duterte, said the mayor from Mindanao should "break his campaign promise of more killings and concentrate instead on leading by upholding the country's human rights commitments."

"The outrage and disaffection that got him elected are genuine — manipulated by the likes of him but generally genuine — and it would be a big mistake if Duterte continues to think that all he should do to satisfy them is to spill more blood," Conde said.

According to Father Genaro Diwa of Manila, "even if the [election] results would go against the interest of the church and its advocacies, the church has the responsibility to protect the voice of the people," said Father Diwa.

He said the church has done its job and the faithful gave witness by ensuring fair elections by deploying some 700,000 volunteers.

The Parish Pastoral Council for Responsible Voting, a church-based election watchdog, deployed volunteers to 92,509 polling stations around the country on Election Day.

Church volunteers assist voters during the conduct of the May 9 Philippine national elections. (Photo by Jimmy Domingo)

Catholic bishops have pledged its "vigilant collaboration" with the new administration as they called on the faithful "to work with the government for the good of all."

"We shall continue to be vigilant so that ever so often we may speak out to teach … to admonish and to correct — for this is our vocation," the bishops said in a statement released May 10 by Archbishop Socrates Villegas, president of the bishops' conference.

The bishops urged the election winners "to care for the weakest and the most distressed in our midst."

"Children need care that cannot be postponed. And many women still find themselves in situations of exploitation,” while indigenous peoples remain marginalized, the statement said.

During his election campaign, Duterte promised to suppress crime, the spread of illegal drugs, and government corruption within six months of coming to office.

He also vowed to spread economic growth throughout the country and decongest the capital Manila by calling a constitutional convention, within the first year of his term, to look at a federal form of government.

On agriculture and fisheries, Duterte vowed to provide free irrigation and subsidized fertilizer and seeds for farmers and reduce the cost of food by getting rid of unscrupulous middlemen and loan sharks.

He promised to improve labor conditions for workers, boost teachers’ salaries and abolish tax for those earning a monthly income of about US$500 and below.