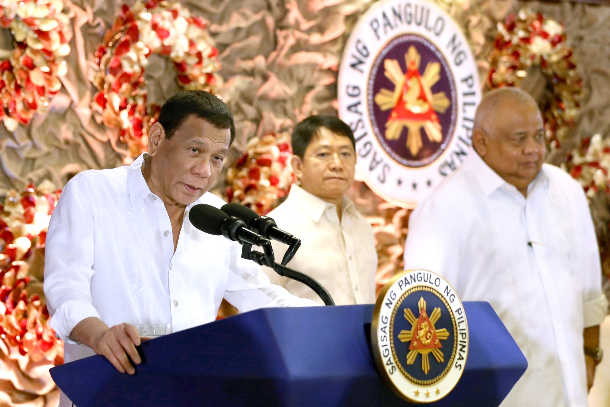 President Rodrigo Duterte renews his attack against Catholic church leaders in a speech at the presidential palace Dec. 5. (Photo courtesy of the Presidential Communications Office)

Catholic bishops in the Philippines have hit back at President Rodrigo Duterte for saying they deserve to be killed, with one bishop branding him a murderous madman.

In a Dec. 5 speech at the presidential palace in capital Manila, Duterte accused bishops in the overwhelmingly Catholic nation of being useless for criticizing his administration, which came to power in June 2016.

"These bishops of bishops, kill them," Duterte said. "This stupid bunch serve no purpose — all they do is criticize."

In another speech later in the day, Duterte reiterated previous attacks on the Catholic Church, describing it as a hypocritical institution.

"Most of the priests there are homosexuals," he said. "Almost 90 percent of you. So, do not postulate on my morality."

The president also clarified that while he is not an atheist, he does not have the "same God" as Catholics.

"I never said I do not believe in God,” Duterte said. "What I said is your God is stupid, mine has a lot of common sense. That’s what I told the bishops; I never said I was an atheist.”

Duterte added that he could not have made it in life without God.

Several bishops reacted to what they described as the president's dangerous call for them to be killed.

"This is worrisome coming from a psychotic mind," said Bishop Arturo Bastes of Sorsogon, adding that such provocation should not be taken lightly.

"This should no longer be taken as joke," the prelate said, adding that political aides would have warned Duterte against stirring violence.

Manila Auxiliary Bishop Broderick Pabillo said anyone who asks for others to be killed was not a real leader.

"He is instigating people to go against the law,” said the Manila prelate. "I hope he is joking or he is really out of his mind."

Bishop Ruperto Santos of Balanga said the president lost moral authority with his heartless, hateful and harmful call for the killing of bishops.

"His statement disgraced himself and is a disappointment to all God-fearing citizens of our country," Bishop Santos said.

The president's incendiary remarks came in the wake of the first anniversary of the still unsolved killing of Catholic priest Marcelito Paez on Dec. 4, 2017, in the province of Nueva Ecija.

Duterte has repeatedly attacked Catholic leaders, especially those who have been vocal against the government's anti-narcotics campaign amid claims that up to 20,000 people have been victims of extrajudicial killings.