President says he is not out to fight with Catholic leaders, adding that he is trying to hold a dialogue with bishops Philippine President Rodrigo Duterte speaks before officials in the city of Maasin where he again criticized church leaders. (Photo courtesy of the Presidential Communications Office)

There seems to be no end to Philippine President Rodrigo Duterte's rants against God and Catholic Church leaders.

In his latest outburst on July 2, the president lambasted his critics, telling them to stop attacking his "god" who is much better than other gods.

"God is what you conceive him to be," Duterte said.

"We all have different gods," added the 73-year-old firebrand leader of about 110 million predominantly Catholic people.

In a speech in the central Philippine town of Maasin, Duterte debunked the idea of hell.

"My god has no heaven or hell. Do you think God is stupid to create hell?" asked the president, adding that "God is all forgiving."

He also said there is no proof of the existence of purgatory, although he said there is heaven, except that "Saint Peter is not guarding it."

"The god I know I learned from my parents," said Duterte. "Not the gods of those who use God as a platform to warn of karma," he added.

The president said he is not out to fight with Catholic Church leaders, adding that he is even trying to hold a dialogue with bishops, especially with Archbishop Romulo Valles of Davao.

A palace official told ucanews.com that Duterte is meeting Archbishop Valles, president of the Catholic bishops' conference, on July 9. 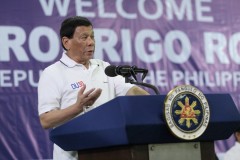 Philippine bishops call on people to pray for Duterte

"We understand each other. He is very kind," Duterte said of the archbishop.

"As long as he works on his own and I work on my own, we will have no problem.

Manila Auxiliary Bishop Broderick Pabillo, meanwhile, said Duterte has always been against Catholic Church leaders because they warned voters about the president's track record as a politician.

"Now in hindsight, have these warnings been proven to be true?" asked the prelate, adding that he hopes people have now learned their lesson.

"We are in this mess not only because of Duterte but because of our [politicians] who have no guts to stand up for what is right but are instead very subservient," said Bishop Pabillo, referring to thousands of killings in Duterte's war against drugs and other alleged rights abuses.

"I hope we have learned the lesson or else we may blame God again for our foolishness," he added.

Catholic bishops in the Philippines have called for prayers for the president so that he can be "healed and forgiven."

In several pronouncements, Duterte claimed that he was a victim of abuse by a priest during his childhood.

The presidential palace defended Duterte's tirades against God and the church, saying that it stemmed from his alleged bad experiences with priests.