Move gives Sister Patricia Fox only until Nov. 3 before her temporary visitor’s visa runs out 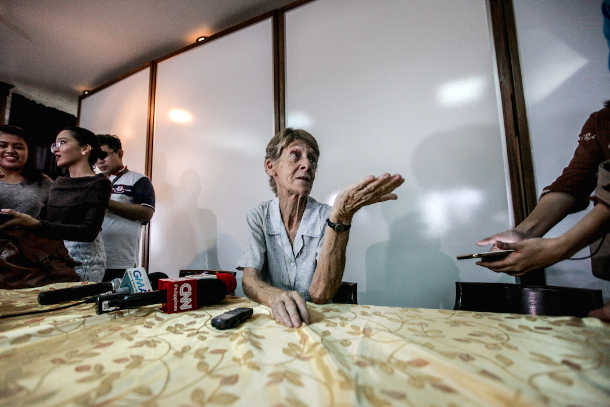 Philippine authorities have announced that Australian missionary nun Patricia Fox, who was earlier arrested and ordered deported, has only a week left before her visa expires.

The Catholic nun, who was accused of participating in partisan political activities, is staying in Manila as a tourist pending a ruling on her appeal to the Justice Department.

The Bureau of Immigration announced on Oct. 26 that it had downgraded Sister Fox’s missionary visa to a temporary visitor’s visa that has a 59-day validity.

Immigration spokeswoman Dana Krizia Sandoval said the nun was given 59 days from the day her missionary visa expired on Sept. 5. Sister Fox's temporary visitor’s visa would expire on Nov. 3.

Sandoval said it was "too early to tell" if the nun's visa could still be extended. "We have to wait for the decision on her appeal to the [Justice Department] first," said the bureau spokeswoman.

On Oct. 4, immigration authorities denied a request by Sister Fox for them to extend her missionary visa. The bureau said the nun had "failed to raise any new and substantial arguments" as to why her missionary visa should be renewed.

The nun's visa expired on Sept. 5. She applied for an extension, but this was denied eight days later.

In its decision, the immigration bureau said an approval would have been "inconsistent with the findings cited in the deportation order against her."

In July, authorities ordered Sister Fox to leave the Philippines after she was declared an "undesirable alien" by the bureau.

In a 10-page resolution, it found the nun was "in violation of the limitations and conditions of her missionary visa" for reportedly joining partisan political activities.

The regional superior of the Sisters of Our Lady of Sion, an international Catholic congregation, was arrested and detained overnight on April 16 for "joining political rallies."

Philippine Church leaders have repeatedly condemned the deportation order, saying it is a government move to harass those who criticize Philippine President Rodrigo Duterte’s administration.

The 72-year-old Sister Fox has spent the last 27 years in the country, extending help to land reform advocates, tribal peoples and political prisoners.

Her lawyer welcomed the decision to downgrade the missionary visa. "This means she can still stay in the Philippines to face the deportation charges against her," said Maria Sol Taule.

Taule said Sister Fox’s presence in the country is vital to the deportation case that she is facing before the Department of Justice. "We intend to exhaust all avenues possible to let Sister Fox stay," said the lawyer.