The Philippines is the only country, apart from the Vatican, that does not allow divorce legally 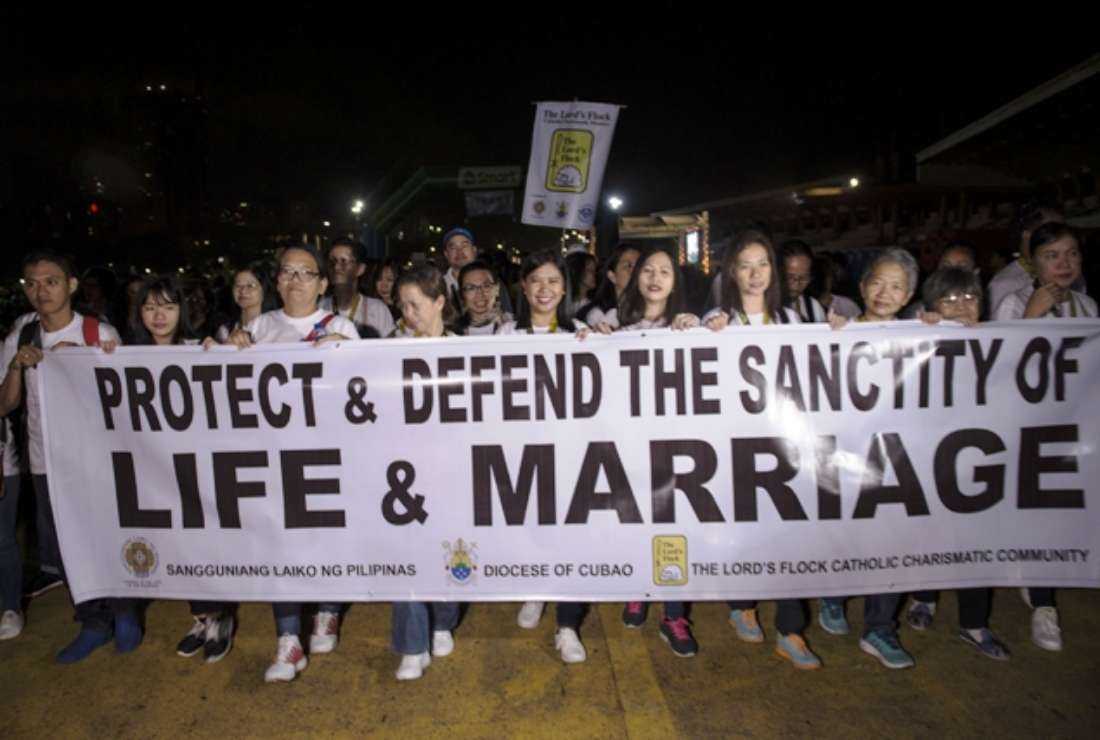 Philippine Catholic faithful holding a banner as they take part in a "Walk for Life" protest at a park in Manila, on Feb. 24, 2018. (Photo: AFP)

Catholic bishops and a youth group have expressed disappointment after a lawmaker filed a bill in the parliament seeking the legalization of divorce in the Philippines under the country’s new President Ferdinand Marcos Junior.

Father Jerome Secillano, executive secretary of the Catholic Bishops Conference of the Philippines said it was unfortunate that lawmakers who sponsored the divorce bill would rather destroy than protect the family.

“It is sad to know that we have legislators who rather focus on breaking marriages and the family rather than fixing them or strengthening the marital bond,” Father Jerome Secillano said in an interview with Radio Veritas Asia on July 6.

Father Secillano said lawmakers have more pressing problems to address in the country instead of aiding divorce in the Philippines.

Until now, the Philippines is the only country, apart from the Vatican, that does not allow divorce legally. Catholic Church only permits canonical annulment of marriage.

The state allows declaration of nullity based on psychological incapacity, a long and expensive legal process that only the court could decide, not the couple themselves.

A previous divorce bill was set aside during the rule of President Rodrigo Duterte due to the outbreak of the Covid-19 pandemic.

Lawmaker Lagman said that he believes the bill would offer freedom to couples from dysfunctional marriages and would become a key to upholding the quality of family life among Filipino families.

Father Secillano, however, said that economic reforms must be the priority of lawmakers under President Marcos.

“The unreasonable penchant of these legislators to the divorce bill while we are reeling from economic devastation tells me that it’s no longer about helping Filipinos rise up from economic poverty but a matter of pride and subservience to whoever is behind this measure,” he added.

Retired Bishop Arturo Basters of Sorsogon also said lawmakers should remember their oath to uphold the constitution by safeguarding the family.

“If they cannot keep the very oath they took when they first began their public office, how much more of the fulfillment of the promise we can expect from them?”, he added.

Catholic youth group, Youth for Christ, has denounced Lagman’s bill on the feast of Italian Saint Maria Goretti, one of the church’s youngest saints and patron of modern youth and purity.

Goretti died on July 6, 1902, at the age of 12, after she was stabbed by her neighbor, Alessandro Serenelli, who tried to rape her. She was known for her deep faith, hatred for sin, forgiving heart, and intense love for God. Pope Pius XII canonized her on June 24, 1950.

The group said Filipino Catholics should pray to Maria Goretti for the protection of the family and the young.

“We should all pray to Saint Maria Goretti for the protection of the youth and the family. The family is the basic unit of society where many young people learn how to love and how to be good Christians. So, we must protect it always,” the group said in a Facebook post.

Supporters of the bill, however, said, that the passage of the bill would provide an option to those who want to save themselves from the torments of dysfunctional marriages.

“The law is never mandatory but merely an option to those who want to avail divorce as a legal option. So why should Catholic conservatives deprive us of that right?” a Catholic from Manila told UCA News on condition of anonymity.