One prelate, however, is questioning motive for making a purely Catholic religious celebration a national day 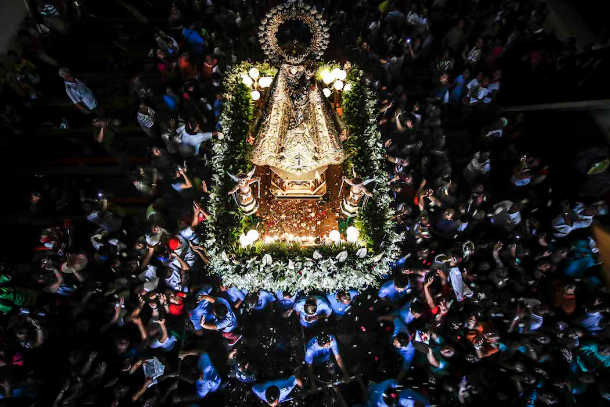 Filipino Catholics join a religious procession in the northern Philippine province of Pangasinan in honor of the Blessed Virgin Mary. (Photo by Jojo Rinoza)

The Philippine Congress has passed a bill declaring Sept. 8, the Feast of the Nativity of the Virgin Mary, a national holiday.

The Senate approved the bill unanimously on May 20.

If signed off by President Rodrigo Duterte, it would be the second Marian feast to be declared a holiday in the Philippines.

Dec. 8 was declared a holiday in 2017 to mark the Feast of the Immaculate Conception.

During last year's feast, Duterte reminded Filipinos to remain humble and faithful "for the people."

He paid homage to Mary and described her as "selfless" when she accepted the invitation to be Jesus Christ's mother "so that the plan of salvation be realized."

He called Mary "the epitome of faith and a source of inspiration" for many Christians, especially during challenging times.

Days before the feast, however, Duterte said in the guise of a joke that bishops "should be killed" for criticizing his administration.

"I only wish [the politicians'] apparent devotion to Mary translates into genuine service to people and actual practice of Christian values in their personal and official lives," said Benedictine nun Mary John Mananzan.

Bishop Ruperto Santos of Balanga said what the legislators did was "very inspiring and interesting good news" and spoke of the Filipino culture of being "pro-God" and "pro-mother."

"The Senate rightfully did what we Filipinos hold dear in our hearts. The Senate publicly manifested that our country is Marian," said Bishop Santos, head of the Episcopal Commission on Migrants and Itinerant People.

Archbishop Fernando Capalla, retired prelate of Davao, said that while the declaration is "welcomed and commendable ... one reaction is why?”

Congressman Rodolfo Farinas, author of the bill, said the holiday aims to enable Catholics "to venerate and celebrate their devotion to the Blessed Virgin Mary."

The legislator noted what he described as the people’s fervent and deep devotion to the Blessed Virgin Mary" that is reflected in the celebrations.

Pope Pius XII declared the Virgin Mary as the principal patroness of the Philippines in an apostolic letter on Sept. 12, 1942.