Philippines clergy sex abuse protocol 'ahead of its time'

Measures dealing with sexual misconduct are more than a decade old, bishops claim 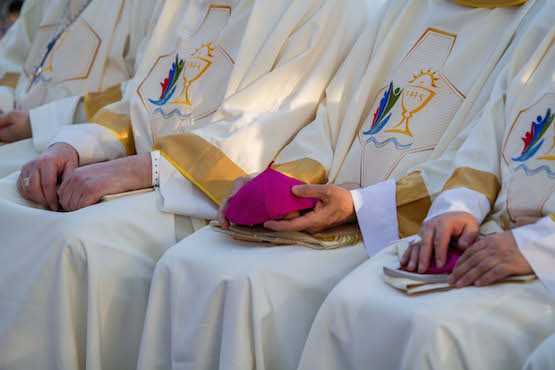 Philippine bishops at the International Eucharistic Congress in Cebu in January. The church has been dealing with the issue of sex abuse by priests for over 10 years, says the bishops' conference. (Photo by Mark Saludes)

The Catholic Church in the Philippines is ahead of its time in addressing cases of clergy sex abuse, according to a Filipino bishop.

"We drafted our protocol in handling cases of clergy sexual misconduct years back," said Bishop Gerardo Alminaza of San Carlos.

The prelate made the statement when asked about his reaction to the movie "Spotlight," which won best original screenplay and best picture at the Academy Awards in the United States on Feb. 28.

The movie follows an investigation conducted by a group journalists on Catholic priests who were accused of sexually abusing children in Boston.

Several Philippine cities were listed in the movie as places around the world where accused priests in Boston were transferred.

Bishop Alminaza admitted that the church has faced the problem "since more than 10 years ago, not in silence but also not visibly."

In 2007, the country's Catholic bishops established a center that hosts programs for the formation of clergy, "including troubled priests."

Aside from providing ongoing information for the clergy, the "national center for renewal" also assists priests who are in "crisis."

Bishop Alminaza refused to divulge details about the center, but said the Philippine Catholic Church "humbly acknowledges and recognizes" the problems.

"The [bishops' conference] is one step ahead of its plans in handling such [cases]," the prelate told ucanews.com.

"Bishops are determined to make sure the church is a safe environment for all Catholics, especially children," read the statement.

Bishop Alminaza said the church has reached out "not just to priests with problems but to victims and their families, as well as to the presbyteries and communities who are equally affected by the scandals."

"There were bishops who were asked to resign for their failure to observe the protocol," he said.

Bishop Ruperto Santos of Balanga said the church must face victims of clerical abuses "as it is the least, the lost, and the last that the church must take care and serve."

The prelate said "offenders" should "never go unpunished and should be dismissed from the organization" while victims must "be assisted and helped."

Church leaders in the Philippines in 2002 apologized for reported sexual abuses, including adultery, homosexuality, and child abuse by at least 200 priests over the past 20 years.

In 2003, at least 34 priests were suspended in a sex abuse scandal involving sexual harassment of women. At least 20 of the priests involved came from a single diocese. In that same year, the country's bishops created guidelines on how to deal with offences committed by the clergy.