Both the organization and Asia will benefit from appointment, bishops say Tagle is a "gift of the Church in the Philippines to the world", Archbishop Socrates Villegas of Dagupan, president of the Philippines bishops' conference, said at the weekend.

"He is a blessing everywhere he goes," he said in an interview. "We are very happy and proud," Villegas said.

Manila Auxiliary Bishop Broderick Pabillo said Tagle's election as head of the confederation of 165 Catholic relief, development and social service organizations operating in over 200 countries and territories, is a "great honor for our country".

"I wish him well in his service to the Universal Church," Pabillo said.

Fr Anton Pascual, executive director of Caritas Manila, said the world can learn from the Philippine experience of "survival [and] resiliency imbedded in our culture and the steadfastness of our faith".

"[Tagle] represents the Third World that experiences the brunt of calamities, both man-made and natural," said Pascual, adding that Tagle deserved the post because "his heart is with the poor".

"He speaks their language, breathes their aspirations and can discern God's will that will resonate for mercy and compassion," Pascual said.

Tagle will remain chairman of the board of Caritas Manila.

Pascual said Tagle's role as head of Caritas Internationalis will be "more or less a coordinator" who will give direction as to what will be the priorities of the organization. 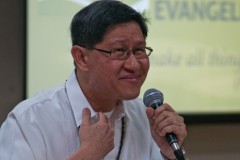 "We will not be losing him," the priest said, adding that with Tagle’s election global charities will help more people, especially in Asia.

He accepted his election on Friday "in the name of all of the poor people in the world".

A statement released by Caritas quoted Tagle urging leaders of the organization to "strengthen the church of the poor so our witness can help guide us to a world of understanding justice, true freedom and peace".