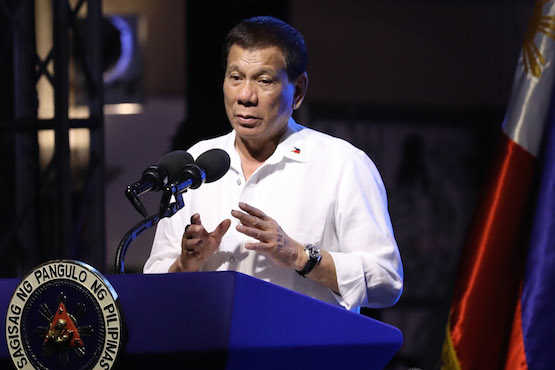 Philippine President Rodrigo Duterte pays tribute on Nov. 21 to the heroism of fallen soldiers and policemen who took part in the operations to liberate Marawi City. The president later shut the door on talks with communist rebels after a recent deadly ambush on a police vehicle. (Photo courtesy of Presidential Communications Office)

The Philippine government announced on Nov. 22 the "cancellation of all planned meetings" with communist rebels under the umbrella of the National Democratic Front of the Philippines, including the Communist Party of the Philippines and its armed wing, the New People’s Army.

In a statement, government chief peace adviser Jesus Dureza said the cancellation of talks is "in line with President [Rodrigo] Duterte's directive that there will be no more peace talks with [the communists] until a "desired enabling environment is present.

Duresa said "recent tragic and violent incidents allegedly committed by communist rebels "left the president with no choice but to arrive at this decision. The official said the suspension of talks is "an unfortunate development in our work for peace.

While formal talks have been suspended since July, both sides have been holding informal discussions in the Netherlands in an attempt to resume full negotiations.

Several government negotiators left the Philippines last week supposedly for informal meetings with rebel representatives in Europe, ucanews.com learned from sources, even as Duterte announced that he was planning to declare Filipino communists as "terrorists."

The president made the latest announcement following an ambush by communist guerrillas on a police vehicle in Mindanao that resulted in the death of a four-month old baby.