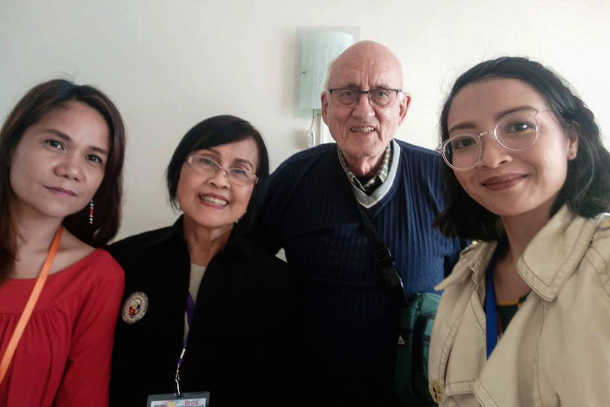 Australian lawyer Gill Boehringer poses for a photograph with his lawyer and supporters inside the immigration detention facility at Manila's international airport on Aug. 8. (Photo supplied)

Boehringer is reportedly on the bureau's "blacklist" for joining political rallies last year and a fact-finding and solidarity mission in Mindanao in February.

Three foreign Methodist missionaries were deported from the Philippines last month for going on the same trip.

She said the Australian lawyer was blacklisted following a recommendation from the government's intelligence sources.

Sandoval said Boehringer joined a protest rally in November 2015, a violation of a bureau order that prohibits foreigners from engaging in political activities.

The Australian national was included on the blacklist "in the interest of public safety," said Sandoval, adding that he was "a threat to public order and safety."

The immigration official said the bureau is only ensuring that no "undesirable alien" can enter or remain in the country.

She said foreign nationals are afforded "due process by allowing them to file a request for lifting the order."

Boehringer's lawyer, Kathy Panguban, said they have already submitted an appeal to the immigration bureau.

"He is suffering from illnesses that might endanger his life if the government force him to travel another 17 hours," said Panguban.

Boehringer, who holds American and Australian citizenship, first went to the Philippines as a U.S. naval officer in 1955.

He retired as dean at Macquarie University in Sydney and returned to the Philippines in 2006 to do research on the Philippine-American War.

In 2015, when three tribal leaders were killed in Mindanao, Boehringer was invited to join as an observer on a fact-finding mission.

He denied joining political rallies to attack the government.

"I was never part of any anti-government demonstration," he said, adding that his interest in the Philippines is "to study the life of the tribal people and of course visit my wife."

Boehringer is married to a Filipino woman from Mindanao whom he met in 2015. "I need to see my wife because she cannot fly to Australia yet," he said.

Church and rights groups have expressed support for Boehringer and called on the government to stop his deportation.