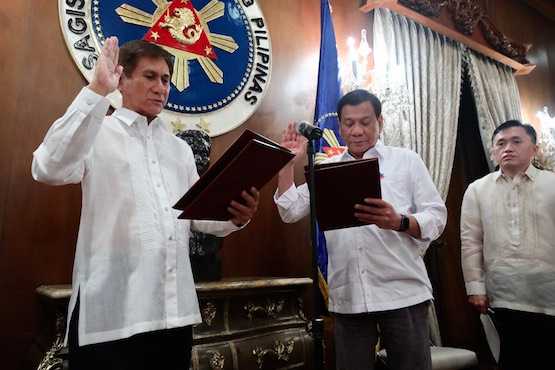 Retired Philippine military chief Roy Cimatu (left) takes his oath of office before President Rodrigo Duterte as the new Secretary of the Department of Environment and Natural Resources on May 7. (Photo by Richard Madelo)

Church and environmental activist groups in the Philippines have rejected the appointment of a former general as head of the country's Environment Department.

Lopez failed to get confirmation by the powerful Commission on Appointments of Congress allegedly due to her hard-line stand against mining.

Father Edwin Gariguez, executive secretary of the social action secretariat of the bishops' conference, said Cimatu seems to be a "compromise choice" to appease the mining industry.

"Cimatu is a neophyte to environmental issues compared to Lopez," said the priest, adding that the general "has no track record in terms of his stand on social justice and environmental protection."

The priest said church leaders will continue appealing to Duterte to reappoint Lopez as head of the department.

At least 14 Catholic bishops and 46 social action directors of various parishes sent a letter of appeal to Duterte on May 8.

"We believe [Lopez] can still be reappointed," said Father Gariguez, adding that Cimatu is "not a worthy replacement."

The environmental activist group Greenpeace said it is "a bit worried" with the appointment of a secretary who has "no clear track record on environmental issues."

Human rights group Karapatan said the appointment of Cimatu "is a form of militarizing the civilian bureaucracy."

Cristina Palabay, Karapatan secretary-general, said the general was linked to the "illegal arrest" of 72 people who were wrongly accused as terrorists in 2002 when Cimatu was head of the army.

"A military man at the [Environment] department's helm would betray the people's longstanding clamor for social justice and environmental protection," said the environmental group Kalikasan.