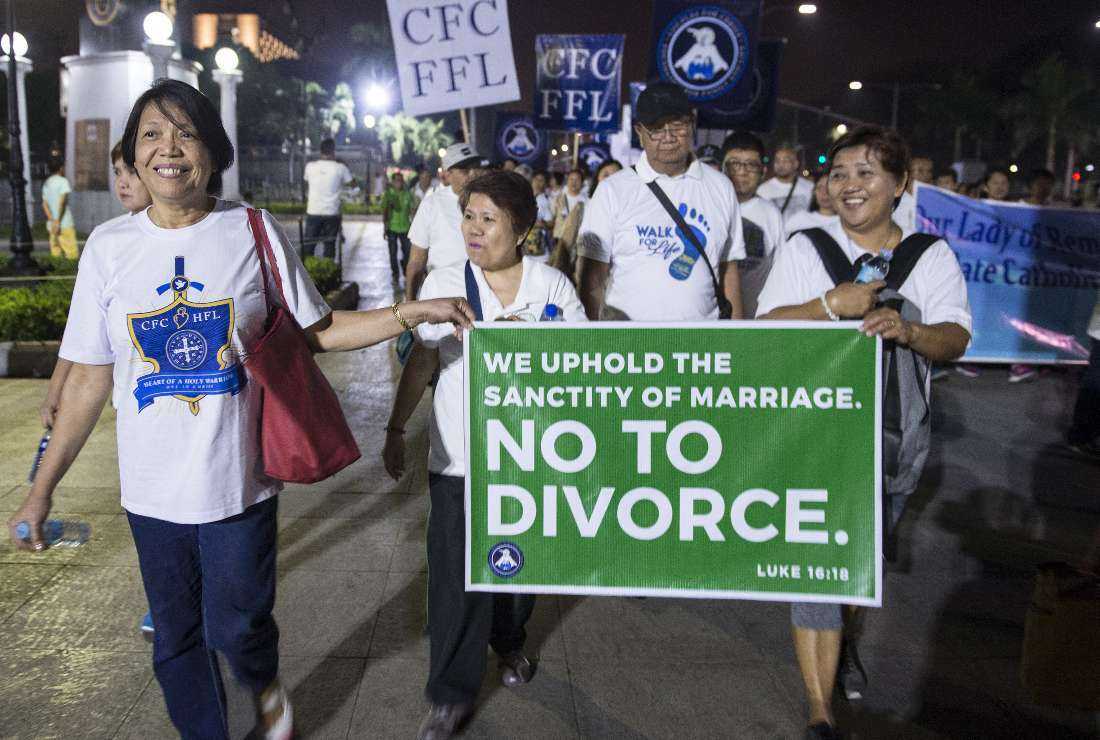 Philippine Catholic faithful holding a banner as they take part in a "Walk for Life" protest at a park in Manila on Feb. 24, 2018. (Photo: AFP)

The Gabriela Women’s Party, a progressive political party advocating for women’s rights, felt boosted by the UN’s call for the Philippines to pass pro-women and gender-sensitive laws.

The group urged Marcos, Jr. on Nov. 21 not to “immediately” reject the United Nations Human Rights Council’s recommendations such as the passage of laws legalizing divorce as well as same-sex marriage.

Marcos’ justice secretary recently commented that the UN’s recommendations were “unacceptable” to the Filipino people “as of the moment.”

“It’s a matter of [public] policy whether we accept it or not and I think we know as a country, we are not ready for that,” Jesus Crispin Remulla told reporters on Nov. 21.

The women’s group, however, said that Marcos’ rejection did not only mean rejecting divorce but the principles of equality and non-discrimination enshrined in the Philippine constitution.

“His [Marcos’] rejection of the UN’s call for the country to legislate laws for divorce was tantamount to his non-recognition of rights, welfare and the struggle for equality of millions of Filipinos,” the party list’s representative Arlene Brosas told UCA News.

Brosas castigated the bill’s critics, including the Church hierarchy, for using religious arguments to oppose divorce.

“What is unacceptable is the use of religious arguments to weigh the necessity of such important legislation,” Brosas said urging the Marcos administration to reconsider its stance on divorce and other pro-women and pro-LGBTQIA+ legislations.

Another member of the group said Marcos lied during the elections when asked about his openness to supporting the divorce bill.

“Obviously, he lied. Before the elections, he said he was open to have divorce in the Philippines in order to get the votes of the progressives or the liberals. But after that, he easily forgot what he’d said, despite a recommendation from the United Nations, an independent, international body,” Michael Rustica told UCA News.

Rustica was referring to Marcos’ interview wherein he claimed that divorce should not be “made easy” for the Filipino people.

“There are real cases that I have seen where the spouses separate, we still do not have divorce, they separate and the kids are better off… the husband and wife are better off. We must allow our couples, our married couples to work hard on it because sometimes it can be fixed. We need to not give them an easy option,” Marcos told reporters on Nov. 20.

The Catholic Bishops’ Conference of the Philippines thanked the Marcos government for not only defending the family but children who would be victims of the separation of their parents.

“A failed marriage is not an argument for divorce. It is rather proof of the necessity that only mature people enter into it. It proves the woeful inadequacy of the present system under Philippine law that makes the issuance by the civil registrar of a marriage license and attendance at a government-delivered seminar on family planning the sufficient conditions for marriage,” the prelates’ Family and Life Commission Secretary Father Rico Ayo told UCA News.

Catholic divorce advocates, however, advised the clergy not to dip their fingers in political matters such as the passage of divorce law.

“Here we are again. What is legal is not necessarily moral. Let us not mix the two. We want to hear legal arguments for the prohibition of divorce. The constitution does not prohibit it, so why should the Church disallow it?” Manila parishioner Lourdes Guaverra told UCA News.