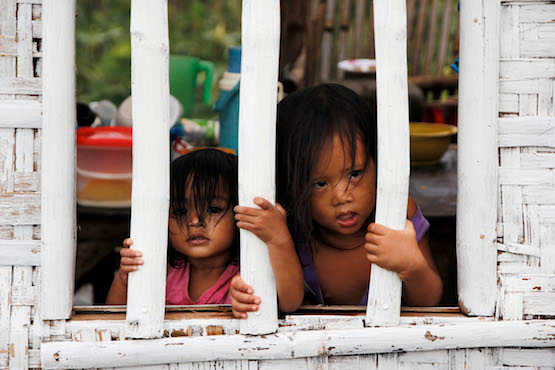 Children watch passersby in a remote village of Cebu. Cases of criminal abuses against women and their children also rose by 200 percent in the Philippines, reports say. (Photo by Joe Torres)

Children make up 77 percent of rape survivors in the Philippines, a predominantly Catholic country, and the crime occurs at a rate of two every minute.

The Center for Women's Resources, said the yearend figure would zoom past the 10,000 mark gathered the previous year.

The research group said 2014 data was double the incident rate of 2010, the year President Benigno Aquino took power in the world's only country that still bans divorce.

Cases of criminal abuses against women and their children also rose by 200 percent over the same period.

Police attribute the increase to improved reporting. Women's groups have also campaigned to break the culture of silence surrounding physical and sexual abuse of women.

But Emmie de Jesus, a legislator of the Gabriela party for women, said official statistics don't reflect the true breadth of the crisis.

Only three of 10 survivors of sexual abuse seek help to stop the attacks, De Jesus told ucanews.com, citing government statistics from 2013. Almost 40 percent suffer in silence; 27 percent share the experience but back out from seeking aid.

That only 7,416 rape suspects are in jail shows how elusive justice is for women in a country that won top education and health marks in a World Economic Forum study on narrowing the gender gap.

It is hard to dispute De Jesus' claim of a direct link between poverty and abuse.

Of women respondents in the national demographic and health survey, 24 percent from the bottom economic classes reported physical abuse, compared to 15 percent in the top brackets.

The pattern held for sexual assaults, which affected 7.5 percent of poor women and five percent of their richer counterparts.

Regions reporting the highest numbers of abuse were also among the poorest and most prone to disasters and conflicts.

In most sexual abuse cases, the tormentors are relatives, friends or guardians.

A fourth of women in relationships have suffered physical abuse, 55 percent by current spouses and partners and 30 percent by exes. Eight percent said the abuse started in the first two years of marriage.

A quarter of Filipinos are still poor. More than 20 million people live in slums full of crime. Six percent of grade school pupils and 8 percent of high school students drop out, drifting to street labor and other risky work like prostitution and cybersex.

UNICEF estimates that 70,000 to 100,000 children are trafficked yearly for sex. To international law enforcement agencies, the Philippines is a key hub of a pedophile cyberporn industry worth several billions of dollars.

Natural disasters and conflicts that displaced millions of women since 2013 have worsened gender abuse.

Violence also rises with the number of children and poor women in the Philippines, which has Southeast Asia's highest fertility rate. A mother and child displaced by super typhoon Haiyan in 2013 await help in a temporary shelter in the province of Cebu. (Photo by Joe Torres)

The Philippines imposes stiff penalties for violence against women and children. But it also has a snail-paced justice system: A million cases arrive at the courts annually; a quarter of judicial posts remain unfilled. Lower court judges on the average receive 644 new cases every year and juggle up to 4,000 cases.

While the national police has a division that tackles crimes against women and children, it has filled less than half of the 200 staff positions. The division head, Chief Superintendent Rosauro Acio, said they only had a budget of about US$212,000 last year for a country with 100 million people scattered across 7,100 islands.

Abuse victims who depend on spouses or partners for economic needs, including that of children, are doubly burdened. Women comprise half of the national labor force but earn only 60 percent of mens' income, according to the national statistics office. They are more likely to be underemployed or unpaid workers. Being the family's primary caregiver also affects earning capacity.

The country allows annulment but under very stringent rules. The government can object even when both parties want out. Applicants need to prove the marriage void. Short of nonconsummation of union, accusations of bigamy or contracting a fake marriage, the alternative is to prove psychological incapacity, with expert witnesses charging up to US$3,000.

Counsel's acceptance fee starts at about US$2,000 and do not include appearance rates, said lawyer Lorna Kapunan. With proceedings dragging on for years, civil annulments on average cost US$10,000 — more than most Filipinos' annual income.

The Vatican recently relaxed guidelines for church annulments, doing away with automatic reviews of decisions by the Appellate Matrimonial Tribunal, which has oversight over diocesan judges.

Archbishop Socrates Villegas of Lingayen-Dagupan, president of the bishops' conference, said the new policy does not change the doctrine about the sacredness of marriage and family life. What it does, he said, is provide balm to Catholics "who suffer quietly" believing in their spousal obligations, "when the truth is there was no marriage to speak of from the very start."

Aside from financial constraints, cultural stereotypes that portray women as chattel and sex objects discourage even upper class and educated women from pursuing justice, noted the study done by the Center for Women's Resources.

Many law enforcers still view the physical or sexual abuse of women as personal problems best left to private settlement, the group said.

"Families can pressure women to drop abuse cases 'for the sake of the children,' while shame erodes their will to pursue rape cases," said De Jesus.

"We are still a country where victims get blamed, where women are told to defer to spouses on the matter of sex, where marital rape remains an alien concept for many and where issues of dress and manners are used to justify abuse," she said.