The museum is dedicated to the memory of victims of the dictatorial regime of Ferdinand Marcos Sr. in the 1970s 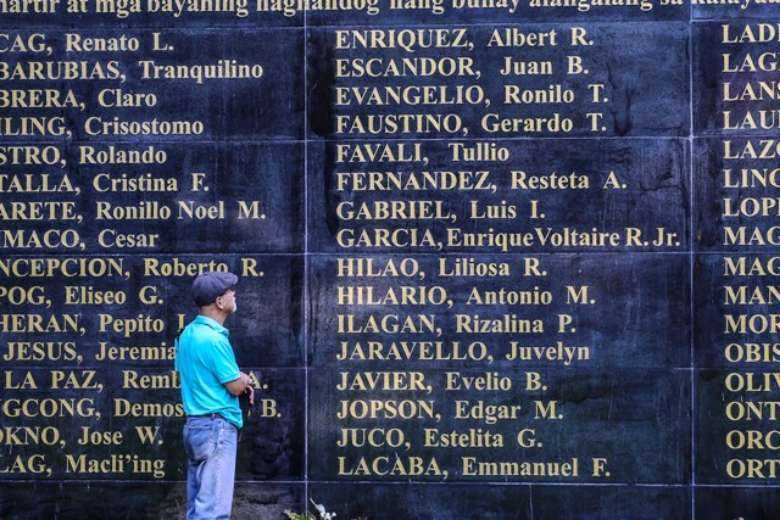 A former political prisoner looks at a Wall of Remembrance in Quezon City, suburban Manila, with the names of victims from the martial law era during the dictatorship of Ferdinand Marcos Sr. in the 1970s. (Photo: AFP)

The University of the Philippines is to open the Freedom Memorial Museum remembering the horrors of the brutal dictatorship of Ferdinand Marcos Sr.

The first-ever state-sponsored museum set up by the nation’s premier university will be spread over 1.4 hectares of land beside its College of Fine Arts inside the Diliman campus. It will open in September.

The flagship project of the Human Rights Violations Victims’ Memorial Commission will house a roll call or list of names of the victims of the Marcos Sr. regime, the university's website said.

“It will also house relevant memorabilia, artifacts, educational materials and audiovisual content which will be open to the public,” it added.

Carmelo Victor Crisanto, executive director of the memorial commission, said the museum building followed the “brutalist” architecture design using raw materials and unfinished concrete in bold, geometric forms to depict the oppression, violence and deaths along with the revolution that ousted the dictator in 1986.

“This is our contribution to the international community of human rights museums. We will put everything, every detail based on facts, no propaganda. We will put in the museum nothing but the truth,” Crisanto said.

“Nothing can stop the truth. Jesus has the authority to forgive sins and bring life. He also has the power to commission his disciples and us today, to be agents of truth to dispel lies and disinformation"

“Nothing can stop the truth. Jesus has the authority to forgive sins and bring life. He also has the power to commission his disciples and us today, to be agents of truth to dispel lies and disinformation,” Father Villanueva told UCA News.

“History never forgets. It may repeat itself to teach its citizens about ignorance, empowerment and authentic leadership. But history should never be forgotten. You can never run away from who you are,” Father Villanueva told Marcos Jr. on Facebook.

The martial law years under Marcos Sr. are regarded as the darkest period in Philippine history.

Over 3,200 people were killed and about 70,000 were imprisoned during that time, according to Amnesty International.

JULIAN E. ABUSO
So pleased with this development on UP Diliman campus. This reminds me of the value of the Holocaust Museum in New York City. Cheers to the University of the Philippines!
Reply