Labor organizations in the Philippines called health workers Covid-19 heroes on April 9 as they took a swipe at the government’s handling of the pandemic during national celebrations to mark the country’s Day of Valor.

The Day of Valor commemorates the fall of Bataan province during World War II to invading Japanese troops.

“As the nation commemorates the Day of Valor, healthcare workers' unions … salute the heroic deeds of our healthcare workers and call for talks with the heads of the Department of Labor and Employment and the Department of Health about the urgent concerns of workers at the forefront of the battle against Covid-19,” Nagkaisa, a coalition of labor groups, said in a statement.

It said it feared health workers would end up like fallen soldiers in World War II, and lose the battle with the coronavirus if the government fails to provide them with support that should also include better pay.

"While their soldier counterparts from World War II were the fallen heroes at Bataan three-quarters of a century ago, we don't want our health workers battling Covid-19 to fall from the disease or due to exhaustion," said coalition chairman Sonny Matula.

He said the situation medical workers were toiling in had worsened in recent months.

“The [medical] unions are seriously concerned about the surge in virus infections, with around 10,000 new cases reported daily,” Matula added.

His comments were backed up by Jesuit Father Marlito Ocon, a priest assigned to the Philippine General Hospital in Manila, the country’s biggest government hospital.

He said health workers were swamped with work and had become extremely vulnerable to the virus because of the volume of patients being admitted to hospitals every day. 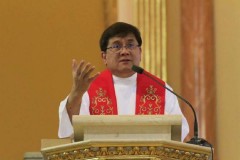 Father Ocon said quarantine rules would not serve their purpose if people are hungry and need to earn a living.

“For ordinary people, staying at home is not an option. They have to work because they have to survive. For healthcare workers and frontliners, they can’t stay at home. They cannot even rest except when they need to be quarantined,” the priest said.