Philippine typhoon survivors wish for roofs and food at Christmas

The widespread destruction caused by Rai has dampened celebrations 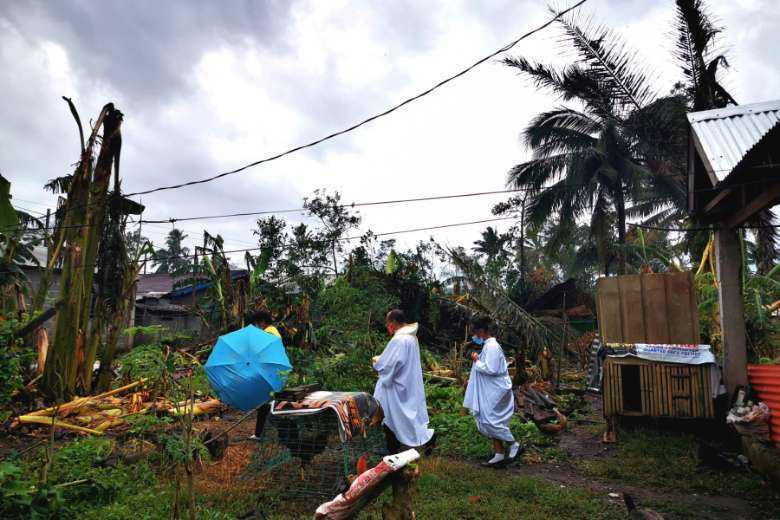 Father Ricardo Virtudazo stands in a pool of water in his typhoon-hit church in the southern Philippines delivering Christmas Day mass to dozens of devotees whose wishes this year were for new roofs, food and fine weather.

More than a week after Typhoon Rai cut a swathe through the archipelago, killing nearly 400 people and leaving hundreds of thousands homeless, survivors clung to family and faith after their homes -- and planned festivities -- were wiped out.

"What's important is all of us are safe," said Joy Parera, 31, attending Christmas mass with her husband at San Isidro Labrador Parish church in the town of Alegria, on the northern tip of Mindanao island.

A light rain soaked the pews and white tiled floor of the damaged church, which has been left with a gaping hole in the roof after Rai ravaged the area.

Devotees wore masks as they gathered inside the church festooned with Christmas decorations and prayed for a better year.

"In spite of the calamities they experience, they still have faith in God."

Christmas is one of the most important events in the Christian calendar and in the Catholic-majority Philippines, families typically gather to share a meal.

But the widespread destruction caused by Rai in the southern and central regions of the country has dampened celebrations as many survivors plead for drinking water and food.

Mindanao, Siargao, Dinagat and Bohol islands are among the most devastated by the storm, which knocked out electricity, tore off roofs, shredded wooden buildings, felled concrete power poles and uprooted trees.

The scale of the damage, lack of mobile phone signal or internet in many areas, and depleted government coffers after the Covid-19 response were hampering efforts to distribute aid.

'We'll make do with spaghetti'

Nardel Vicente said his Christmas wish was for someone to help him buy a new roof for his house in Alegria after it was wrecked by Rai, which hit the country on December 16 as a super typhoon.

Jobless and with little money to spare, Vicente said his family would not be able to prepare a festive meal this year.

"In previous years we had spaghetti, pork, chicken -- whatever we could afford between us," the 38-year-old said.

But he added: "That's ok -- we're alive. It's better than welcoming Christmas with a dead loved one."

Marites Sotis usually serves up meat, spring rolls and salad for her family.

"We won't have those this year because they cost a lot of money," Sotis, 53, told AFP in the coastal municipality of Placer where the storm felled most of her family's coconut trees.

"We'll make do with spaghetti."

Some survivors in nearby Surigao City have been standing on roads for days begging for money and food from passing motorists after failing to receive a scrap of government assistance.

Inaga Edulzura, 41, said she hoped to get a packet of spaghetti to cook for her family. Otherwise, they would "make do with sliced bread".

"Our only request is that there's fine weather on Christmas Day to give us some cheer," she told AFP.

"That and some food."