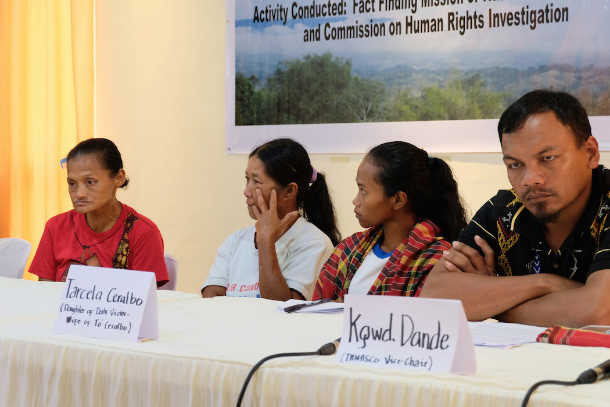 Tribal leader Datu Dande Dinyan faces the media along with relatives of the eight tribesmen who were killed in the southern Philippines in 2017. (Photo by Bong S. Sarmiento)

A group of tribal people in the southern Philippines have petitioned the government to cancel a permit issued to a coffee plantation on what they say is their ancestral domain.

The group, backed by environmental activist and church groups, filed the petition against M&S Company, which operates the Dawang coffee plantation in Mindanao, in Manila on July 2. "For almost 30 years we have not been able to farm and make a living because of the plantation," said Datu Dande Dinyan, head of the tribal group T’boli-Manobo S’Daf Claimants Organization.The petitioners claimed that they did not give their "free, prior, and informed consent" to M&S, which holds a "forest management agreement," or a "Forest Management Agreement" (FMA) from the government.A FMA is a production-sharing contract entered into by the government and an applicant, which is granted an exclusive right to develop, manage, protect and utilize a specified area of forestland and forest resources for a period of at least 25 years.

M&S’ agreement was later merged with another forest management deal from another company, covering a total of about 29,000 hectares of land straddling the provinces of South Cotabato and Sultan Kudarat.

Sister Susan Bolanio of the Oblates of Notre Dame order, who has been assisting the tribal people, said the government has already conducted "field investigations" into the merger.

Pochoy Labog, the tribal group’s lawyer, said the agreement merger "was a sleight of hand" that skirted the expiration of the deal allegedly to favor the company.

"The [Department of Environment and Natural Resources] must immediately cancel this dubious permit and end continuing violations by M&S," said the lawyer.Sister Bolanio, meanwhile, said there is a "feeling of apprehension" in the tribal community because of the presence of armed company guards.The nun called on the government to release the result of its investigation, saying that the company "has no legal basis to continue its operation" after the National Commission on Indigenous Peoples cancelled a "certificate of compliance" issued to M&S.The presence of the company in the tribal lands has been mired in controversy following the killing of a tribal leader and seven other tribesmen in December 2017, an incident described by human rights groups as a massacre.The military, however, claimed that those who died were rebel fighters and supporters who were killed during a "legitimate military operation."