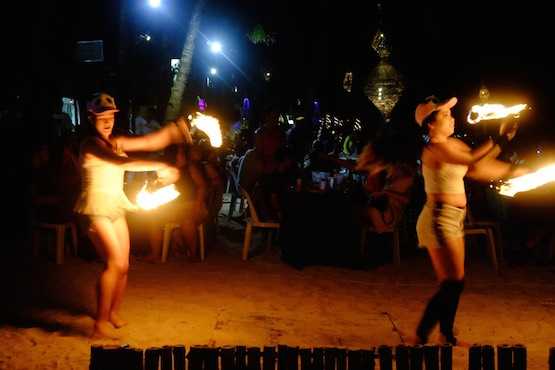 Performers entertain tourists in one of Boracay island's commercial establishments. Members of the indigenous Ati tribe are protesting the growing incursion of outsiders into their ancestral land. (Photo by Jimmy Domingo)

Ati tribal people on the picturesque island of Boracay in the central Philippines are turning to faith in their fight against the incursion of business interests on their ancestral land.

In recent years, the government has granted the tribe land titles to its ancestral homeland, but with improving living conditions business and commercial interests are moving in.

Settlers from other islands started to put up businesses and were even reportedly harassing the Atis to drive them out of the area.

Since 2000, the tribal people, who number about 2,000, have been claiming legal ownership over the whole of Boracay, a small island located about 320 kilometers south of Manila.

A major tourist destination, it is known for its white beaches and beautiful sunsets and has been ranked in travel and leisure magazines as the one of the world's best islands.

Catholic Church leaders have expressed alarm over violence and harassment of the tribe by settlers, especially after the killing of a tribal leader, Dexter Condez, in 2013.

"We seem to have nowhere to go for help but God," said Delsa Justo, head of the Boracay Ati Tribal Organization.

She said she hopes that the Child Jesus, whose feast is celebrated in the central Philippines next week, will come to their aid.

Although many of them are non-Christian, many Ati tribal people are helping the local parish in preparing for a religious festival on the island on Jan. 14.

The "Ati-Atihan," a feast held in honor of the Child Jesus, has been renamed by the parish as the "Santo Nino Festival." The term "Ati-Atihan" means "to be like Atis."

"We are OK with that because the parish respects the plight of the Ati people in Boracay," said Vangie Tamboon, one of the leaders of the tribal organization.

She said a source of livelihood for the tribal people is religious items and island souvenirs, especially during the annual festival.

John Francis Lagman of the farmers' group Pakisama said development on Boracay has threatened the existence of the tribal community.

"They need social protection because they are being continuously threatened," Lagman told ucanews.com.

Only last month, a group of settlers destroyed a portion of a fence that separates the 200-hectare Ati property from other parts of the island.

The government has classified the piece of land as part of the ancestral domain of the tribe.