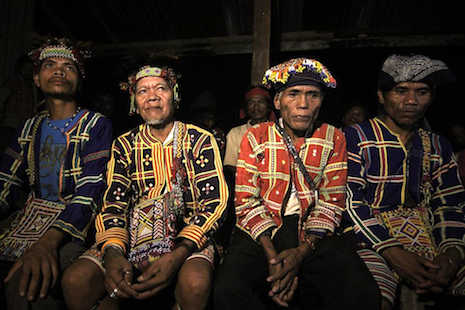 Tribal groups in Davao del Norte province on Friday appealed to the government to protect their claims to ancestral land and to suspend military operations that have targeted land activists’ resistance to mining and logging claims in the region.

“We need peace, respect for our right to the land we till and protection for the environment, for our children and the future generation,” Datu Guibang Apoga, a Manobo leader of Ta Igkanugon - Unity in Defense of Ancestral Land - told ucanews.com on Friday.

Apoga has a US$115,000 bounty for his capture after launching a pangayaw, or tribal declaration of war, in 1993 against the entry of mining and logging companies in the southern province.

In response, the government has for years conducted operations to root out the activists – the latest in March, during which 1,300 Manobo villagers (515 of them children) fled their homes after a series of bombardments by the government that targeted Apoga’s group.

The military last week pulled its forces out of the area to allow villagers to return to their homes.

“The military has failed in breaking the organized strength of the Manobos in upholoding their right to land, despite continuous military operations,” said Cristina Palabay, secretary general of Karapatan.

She added that the attacks “have only resulted in grave human rights violations, and social and economic impact on the lives of the people”.

An initial report from the mission found that at least 88 percent of the houses in areas around Talaingod in Davao del Norte “sustained damage, registered missing items or were ransacked” during military operations.

The mission further found that “schools were ransacked and vandalized while livestock and coconuts were wiped out”.

Captain Ernest Carolina, spokesman for the army’s 10th Infantry Division, defended the military incursions in Talaingod as a response to the presence of communist New People’s Army rebels.

Palabay, however, said “the facts will speak for themselves”.

She added: “It’s ridiculous to insinuate that everyone in Talaingod, including the children, are delusional and are only making up a story that soldiers are harassing them and dropping bombs very close to their homes.”

Palabay said the findings of Karapan’s investigation would be presented to the United Nations next month in Geneva during the 26th session of the Human Rights Commission.