Huge scheme on Kaliwa River will displace at least 15,000 people, they say Tribal groups attend a gathering in Manila on Sept. 10 to discuss their opposition to the proposed dam project in the northern Philippines. (Photo by Mark Saludes)

A group of tribal women in the Philippines has appealed to church groups to put their campaign against dam projects on the agenda during the Church's "Season of Creation."

Catholic Church leaders renewed calls for the protection of the environment ahead of this year's "Season of Creation."In 2015, Pope Francis declared Sept. 1 the "World Day of Prayer for the Care of Creation" and called for the celebration of the "Season of Creation," which lasts from Sept. 1 to Oct. 4.
Donate to UCA News with a small contribution of your choice
"We hope that the season becomes a platform for us tribal people to tell our story," said Kakay Tolentino, chairwoman of the Bai Indigenous Women Network.

Tolentino said the Church is "one of the remaining institutions that the tribal people can rely on."

"We cannot count on the government," she said, adding that the government is behind projects that threaten tribal communities.She said tribal communities affected by dam projects need "stronger voices that can change the hearts and minds of the people."On Sept. 10, environmental activists and tribal people held a public forum in Manila to voice their opposition to the New Centennial Water Source Project.The Philippine government has been in the process of building a mega dam in the northern Philippines with funding from a US$248 million loan from China.The project is an integrated dam system involving the construction of a dam on the Kaliwa River in Rizal province, and a smaller dam downstream in Quezon province.
Related News 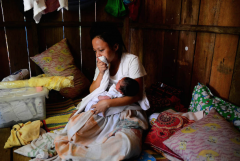 Thank you. You are now signed up to Daily newsletter
The project, which will reportedly displace at least 15,000 tribal people, is one of 75 flagship infrastructure projects under the "Build, Build, Build" program of the government.In 2018, at least 51 Catholic bishops signed a pastoral letter issued by Bishop Bernardino Cortez of Infanta opposing the dam project. The letter called on the government to look for alternative water sources that would address the water supply problem affecting the capital Manila.