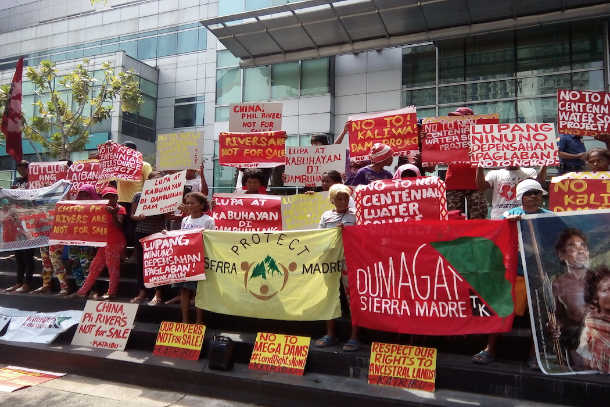 Tribal people who claimed they will be affected by a dam project funded by China hold a demonstration outside the Chinese embassy in Manila. (Photo supplied)

Tribal groups in the Philippines have vowed to hold protests when Chinese President Xi Jinping visits later this month.

The Chinese leader's visit is expected to herald more development aid and progress on joint undersea fuel exploration for the Philippines.

An alliance of tribal groups, however, called on the Chinese government to pull out of committed loans and projects that will have a catastrophic effect on tribal lands.

Wilma Quirrez, spokeswoman of a tribal network, said that with loans from China, a dam project on the main island of Luzon would encroach on more than 20,000 hectares of tribal land.

"This will destroy our sacred land and our environment, a damnation of our lives and of future generations," said Quirrez of the Network Opposed to Kaliwa-Kanan-Laiban Dam.

It is expected the project deal will be signed during Xi's visit beginning on Nov. 19.

Tribal groups, however, said the dam project would displace at least 31,000 people, mostly communities of the Dumagat and Remontado tribes in nine villages in Rizal and Quezon provinces.

"These profit-oriented projects will target the Filipino people's natural resources, displace thousands of indigenous communities, and violate their collective rights to their ancestral land and self-determination," said Quirrez.

Itik delos Santos, tribal leader of the Dumagat tribe in Rizal province, said the project will deplete his tribe's water source. "No amount of money is worth the value of our land," he said.

An activist group is set to question the legality of the US$300 million project before the Supreme Court.

"All it takes to file a Writ of Nature petition against [the building of the dam] are the objections of affected communities in two provinces," said Terry Ridon of the group Infrawatch PH.

A Writ of Kalikasan or Writ of Nature is a legal remedy under Philippine law that provides protection of one's constitutional right to a healthy environment, as outlined in the constitution.

The dam project involves the construction of dams to ensure a long-term water supply for the Philippine capital and adjoining areas.

Among the loan deals expected to be signed by Duterte and Xi later this month is a US$3.3 billion deal to help build a railway line southeast from Manila to the Bicol region.

China is also expected to help fund a US$606 million railway line in the southern Philippine region of Mindanao.

In 2016, China pledged US$24 billion in development aid and investment.

Xi's visit to the Philippines will be the eighth by a Chinese leader since the two sides established diplomatic relations in 1975.