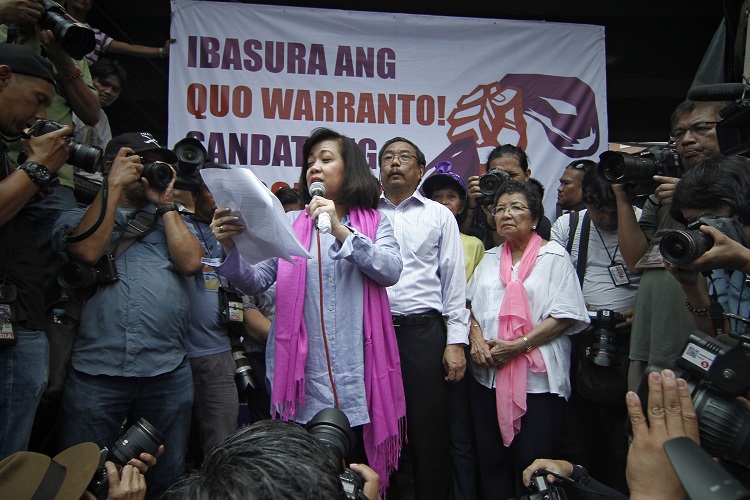 Philippine Chief Justice Maria Lourdes Sereno addresses her supporters after her ouster as the country’s chief magistrate on May 11. (Photo by Vincent Go/ucanews.com)

The Philippines' Supreme Court has kicked out the country's chief justice in an unprecedented decision handed down on May 11.

With eight justices voting in favor and six against, the Supreme Court granted a "quo warranto" petition to remove Chief Justice Maria Lourdes Sereno from office.

A "quo warranto" is a special legal action to resolve a dispute over whether a person has the right to hold a public office he or she occupies.

Sereno's supposed failure to declare her assets and liabilities before she was named head of the judiciary in 2012 was cited as the reason for initiating the proceedings.

The justices who voted to oust her said the chief justice violated the requirements on the submission of Statement of Assets, Liabilities, and Net Worth.

They ruled the "quo warranto" was the proper remedy to remove Sereno.

Sereno attended the court session, but was asked to step out of the room when the other justices deliberated on the "quo warranto" petition.

It was the first time in Philippine history that the highest court has removed its own chief.

In 2012, Chief Justice Renato Corona was ousted after being found guilty of betraying the public trust in an impeachment trial.

Sereno is expected to appeal the ruling through a "motion for reconsideration."

Mockery of the democratic process

A Catholic bishops' conference official condemned the decision, saying it made a "mockery of our democratic process."

Father Edwin Gariguez, executive secretary of the social action secretariat, said the decision only showed that Philippine President Rodrigo Duterte "has succeeded in controlling the judiciary."

"The decision was expected because the accusers are themselves the judges. The wily manipulation by the Duterte administration was so effective," said the priest.

Father Gariguez said the issue was not only about Sereno but also about "creating a rubber stamp Supreme Court subservient to the whims and caprices of a tyrannical president."

"We condemn in the strongest terms the desecration of our constitution and democratic institutions," said the priest.

In a separate statement, the bishops' National Secretariat for Social Action, Justice, and Peace, said Sereno's removal could be part of a grand plan to impose totalitarian rule.

"The chief justice was an impediment to Duterte's plan to make all his efforts legal and constitutional, thus she had to be removed," said the church organization.

The influential Association of Major Religious Superiors in the Philippines issued a statement supporting groups that oppose efforts "to destroy the country's judicial system."

"Together with other concerned citizens of our country, we feel that the process of unseating the chief justice is not right," read the statement.

The group said Sereno's removal via a "quo warranto" petition was a "wrongful way of action."

"Shortcuts are inimical to what our justice system stands for. Why not follow proper and legal procedures which may take a longer time?" the organization's statement said. Church groups hold an overnight vigil on May 10, a day before justices of the Philippines' Supreme Court decided to remove the country's chief justice. (Photo by Daniel Perez)

Hours after the court decision, the National Union of Peoples' Lawyers called on judges and lawyers "to step-up protests against the breakdown of the rule of law and the erosion of judicial independence."

The group described the decision as "deplorable, contemptuous, and a contortion of the constitution."

In a statement, the lawyers' group said it was "abhorring to see the Supreme Court majority surrender its independence" to political pressure.

"The present dispensation has practically crippled all the democratic institutions that supposedly ensure checks and balances within the government," the group said.

Students and youth organizations across the country also called for protests.

They described the ouster as "an attack on judicial independence and the consolidation of President Duterte's power and complete control over the government."

Duterte earlier declared himself Sereno's "enemy" and vowed to throw her out of the Supreme Court.

Sereno accused Duterte's administration of trying to orchestrate her ouster without having to resort to an impeachment trial.

She said the government was persecuting her for trying to protect the judiciary from Duterte who wanted to pursue a crackdown on alleged drug addicts, dealers and their protectors without due process.