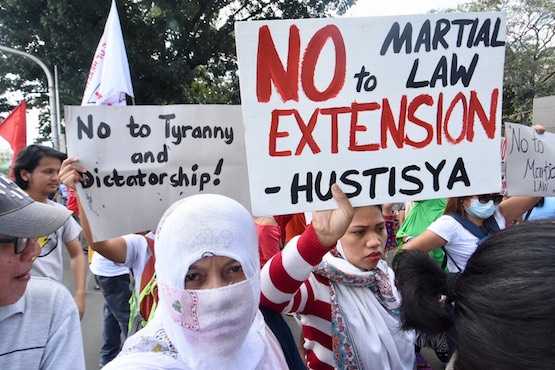 Activists march outside the House of Representatives in Manila to protest the extension for another year of martial law in the southern Philippine region of Mindanao. (Photo by Angie de Silva)

Manila's move to extend martial law for another year in the southern Philippine region of Mindanao is legal, according to the country's Supreme Court.

The court ruled on Feb. 6 there were sufficient grounds for the extension of military rule in the region following a terrorist attack in the city of Marawi last year.

"Public safety requires the extension [of the martial law] as shown by facts presented by the Armed Forces of the Philippines," read the Supreme Court ruling.

Human rights groups warned the ruling "will create a favorable condition for the military to continue its rampage on people's rights with impunity."

The president placed the whole region under martial law following an attack by Islamic State-inspired gunmen on Marawi, resulting in the displacement of about 400,000 people.

Congress first extended military rule up to the end of last year, and extended it again for a year up to Dec. 31, 2018.

Opposition legislators put the legality of the move before the Supreme Court, saying it was against the constitution because there was no actual rebellion or invasion in Mindanao.

Government critics warned that the court ruling would justify "perpetual martial law" in the region.

Redemptorist priest Amado Picardal, a vocal critic of the Duterte administration, said military rule will not bring peace to the island and will only "escalate the spiral of violence."

"It will justify crackdowns on any group identified as threat to national security," said the priest.

He said extending military rule will give the military "more licenses to terrorize" communities that oppose mining and logging operations.

The military welcomed the Supreme Court ruling, saying that it will "boost the morale" of soldiers and allow troops "to better safeguard public safety in Mindanao."

Defense Secretary Delfin Lorenzana, who is the administrator of martial law, said the government can now fully pursue "with great vigor its efforts to end continuing rebellion" in the region.

He said the ruling would also give aid agencies the "necessary space to undertake the rehabilitation of Marawi unhampered."

Military spokesman Col. Edgard Arevalo said it was a "vote of confidence" in the soldiers.

"We would like to assure our people further that your [armed forces] will faithfully perform its duty to protect the people," said the military official.