Members of the ecumenical group Promotion of Church Peoples' Response call on the government to observe human rights in the war against illegal drugs during a demonstration outside a Catholic church in Manila. (Photo by Vincent Go)

A Catholic bishop has urged Philippine senators not to be afraid about uncovering the truth behind the spate of killings in the country as the government's all-out war against illegal drugs continues to intensify.

Senators have initiated a congressional inquiry into the killings in which more than 1,500 people are estimated to have died, according to police and activist tallies.

"I hope the probe would really be true and that the senators would not be cowed," said Auxiliary Bishop Broderick Pabillo of Manila.

In an interview on Aug 19, the prelate also called on the public not to let fear prevent them from telling the truth.

"We ask that all cooperate with the Senate inquiry. Let fear not prevent people from cooperating," the bishop said.

On Aug18, senators started questioning senior officers in the national police force over the growing number of suspected drug addicts and peddlers who have been killed.

Philippine National Police, director-general, Ronald de la Rosa, admitted that 899 "deaths were under investigation" from July 1 to Aug. 15 this year.

"We cannot really attribute this to vigilante killing but they are found dead bodies under investigation," the police chief told senators.

De la Rosa said he was also bothered by the rising number of vigilante-style killings, adding that at least 665 people were killed during "legitimate police operations" against illegal drugs.

In a statement, the United Nations Special Rapporteur on summary executions called on the Philippine government to put an end to the current wave of extrajudicial executions and killings. 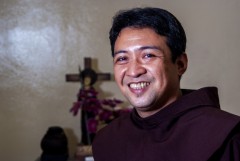 Priest who was a drug addict, appeals for mercy for others "We call on the Philippines authorities to adopt with immediate effect the necessary measures to protect all persons from targeted killings and extrajudicial executions," Special Rapporteur Agnes Callamard said.

In a separate statement, Dainius Pras, UN Special Rapporteur on the right to health, said that "however necessary, responses to the illicit drug trade must be carried out in full compliance with national and international obligations and should respect the human rights of each person."

Pras said drug-dependency "should be treated as a public health issue and justice systems should decriminalize drug consumption and possession for personal use as a means to improve health outcomes."

Philippine President Rodrigo Duterte, however, hit out at "stupid" UN criticism, warning the international body not to interfere.

"Why would the United Nations be so easily swayed into interfering in the affairs of this republic? There are only 1,000 [killed]," said Duterte on Aug 17.

The president also criticized Senator Leila de Lima, who heads the Senate inquiry into the killings.

Duterte accused the senator of having an affair with her married driver who had allegedly collected money from drug sources.

Church groups, however, backed De Lima and urged her not to be fazed by the president's "character assassination."

"She should be strong. What she's facing is not easy. She is fighting for her country," said Father Atillano Fajardo, head of the public affairs office of Manila Archdiocese.

The priest said everybody makes mistakes. "We are all given a chance to change. This chance was not given to those who were killed," he said.

He said Duterte's statements should not be obstacles to De Lima discovering the truth behind the killings.