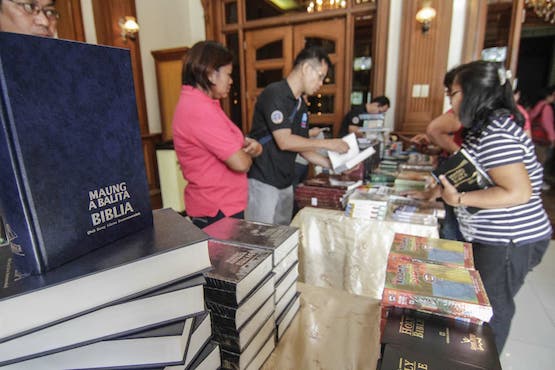 A Bible in the Pangasinan language is displayed for sale during the centennial celebration of the Scripture's translation for Catholics in the northern Philippines. (Photo by Karl Romano)

The Philippine Senate has approved a bill that will declare the last Monday of January each year as "National Bible Day" to celebrate the Christian faith and reflect on the Scriptures.

The bill was tabled by boxing champion-turned-senator Manny Pacquiao, a born-again Christian, who quotes Bible verses in his speeches.

Observing "National Bible Day" would allow Christians "to unite and celebrate the Holy Bible as the cradle of the Christian faith," said the senator.

Another Christian senator, Joel Villanueva, supported the measure, saying, "the Word of God is essential in our daily lives as it serves as guidance in every path we tread."

Bishop Arturo Bastes of Sorsogon of the Episcopal Commission on Biblical Apostolate said the Senate's decision was a "very nice move."

The bill was approved in the Senate with no opposition.

"Let us [use] this opportunity to spiritually empower the Filipino people to open their hearts for utmost nation-building, unity and solidarity," said Pacquaio after the bill was passed on Feb. 5.

The senator noted that a "National Bible Day" observance can be "a catalyst that encourages the development of the moral character and spiritual foundation of every Filipino."

Pacquiao said the holiday is necessary for the "betterment of the country through God-centered governance and people-centered services."