18 people forced to take shelter on Palawan due to coronavirus lockdown, Tagle calls for global ceasefire 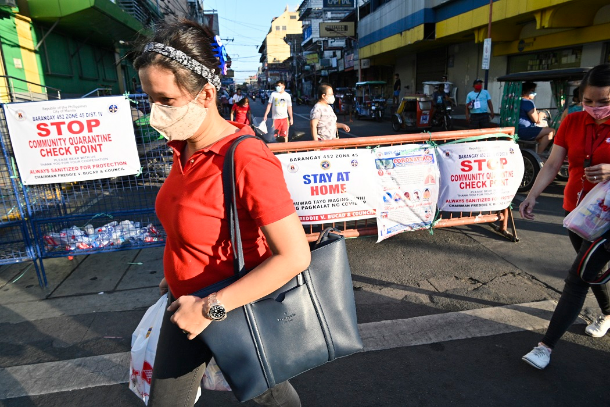 Residents wearing face masks walk past a roadblock with awareness signs after the government imposed an enhanced quarantine against Covid-19 in Manila. The quarantine has forced 18 tourists to seek shelter at a seminary on Palawan. (Photo: AFP)

The tourists arrived for a holiday on Palawan, a large island southwest of Luzon, on March 11.

However, the government canceled all international and domestic flights from March 17 to April 12, placing Palawan province under enhanced community quarantine.

The group stayed at a guesthouse but ran out of cash to pay their bills and for food. Local officials asked for help from Puerto Princesa Diocese, so the seminary stepped in.

“I told them that we are ready to help and they can stay as long as they need shelter. The seminary will be open to cater to the needs of people in a similar situation, especially in this time of crisis,” said Father Roy Vasquez, the seminary rector.

The priest also said that although their resources are limited, they are willing to share whatever they have with the poor.

“Of course, our resources are limited. So, eventually when they run out, we will ask for help or donations. But so far people are sharing their blessings, so we are really very thankful,” Father Vasquez said.

Meanwhile, Cardinal Luis Antonio Tagle, prefect of the Congregation for the Evangelization of Peoples, has called for a global ceasefire during the Covid-19 pandemic. He also urged Catholics to protect and save lives, not to kill each other.

“Our common foe is the infection, not other human beings. A ceasefire reminds us that we must be protecting each other, not killing each other. And we hope that when the pandemic is over that the ceasefire would continue as a way for life,” the former archbishop of Manila said.

He also said the crisis should be an occasion “for peace and reconciliation as one human family.” As of April 2, the Philippines had recorded 2,633 Covid-19 cases with 107 deaths, according to government figures.