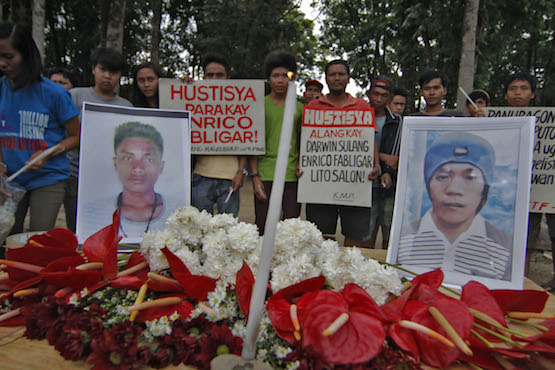 Farmers honor those who died during the April 1 police dispersal of a protest in the southern Philippine city of Kidapawan. (Photo by Mark Saludes)

A Philippine human rights group has brought the plight of protesting farmers affected by drought in the southern Philippines before the United Nations Human Rights Council.

"It is important that the international community is made aware of these gross human rights violations against the farmers," said Cristina Palabay, secretary general of the rights group Karapatan.

Some 6,000 farmers and indigenous people who demanded aid from the government were violently dispersed by police in the southern city of Kidapawan on April 1.

The violence resulted in the deaths of three people while some 60 farmers were charged with direct assault on persons in authority.

An independent fact-finding mission launched by Karapatan and various church groups noted that authorities tried to destroy evidence by clearing the crime scene and burning the personal belongings of the protesting farmers.

The fact-finding team also noted that paralegals and rights activists were prevented from leaving a Protestant church compound where the farmers took shelter.

Palabay said Karapatan has formally requested for three U.N. officials to look into the incident as alleged violations of internationally recognized protocols were committed during the dispersal of the protesters.

"It's ironic that while the Philippines is a U.N. member and a signatory of human rights covenants and instruments, the country’s law enforcement agency, security forces, and government officials have failed to comply with them on many occasions," said Palabay.

She also expressed concern over the "continuing harassment" committed by police and military personnel.

In its report, the fact-finding body recommended for the "indictment and prosecution" of all police operatives on the ground who were responsible for the killings, arrests and detention of the protesting farmers.