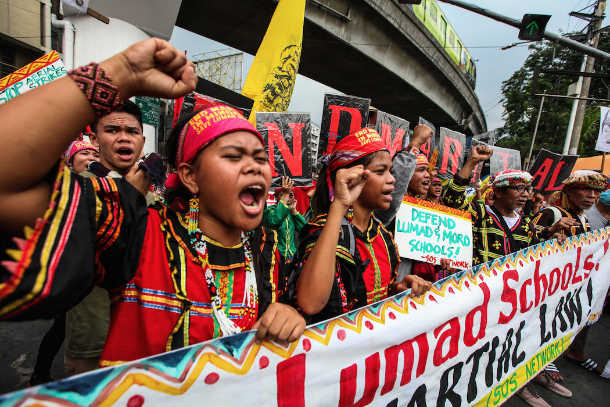 Tribal groups join the protest rallies in Manila on Sept. 21 to call attention to what human rights abuses in their communities. (Photo by Maria Tan)

"Together, let us resist dictatorship, uphold the dignity of life and strive for peace based on justice," a statement by the Association of Major Religious Superiors in the Philippines (AMRSP) said.

The influential Catholic organization is a joint forum of heads of religious congregations, which run most of the country's top universities and institutions.

Priests, nuns, seminarians, pastors, and lay people joined students, farmers, workers, and other sections of society in what they described as a "United People's Action Against Tyranny and Dictatorship."

The protesters aimed to make the demonstration the biggest against the two-year old administration of President Rodrigo Duterte.

Among the issues raised during the marches were the rising prices of goods, the killings of suspected drug users and dealers in the government's war against narcotics, and alleged human rights abuses.

"Let us not allow those who seek to suppress our rights and freedom to hold sway over our future as a nation," read the statement signed by the presidents of the two universities.

"In these present times, when our hard-fought freedom, love for democracy, and inalienable human rights are again being challenged — even by those mandated to protect them — we must bear in mind and take to heart the devastating events of that dark period in our history," read the statement.

Before convening at the Manila's national park for the demonstrations, Catholics held a "Mass for Dignity and Peace" at San Agustin Church in the old city of Intramuros.

"Let us celebrate the gift of life as we uphold its dignity and resist the creeping dictatorship," read a joint statement from the AMRSP, Council of the Laity in the Philippines, Promotion of Church People's Response (PCPR), and the Religious Discernment Group.

The church groups expressed their "disdain and firm stand against ongoing human rights violations, historical revisionism, and our commitment to disallow another dictator to rise or an old one to return."

Earlier in the week, the PCPR paid tribute to activists who died during the 20-year dictatorial rule of Ferdinand Marcos in the 1970s until the 1980s.

"Those who suffered and sacrificed their lives during Marcos' military rule are inspirations for these critical times," said Nardy Sabino, the organization's secretary-general.

He said "a lot of men and women of God died for the freedom" that Filipinos enjoy now. "It is our duty to protect the freedom that they fought and died for," said Sabino.

Etched on a "Wall of Remembrance" at the Heroes' Monument in the suburb of Quezon City are the names of 27 priests, pastors, and religious men and women who fought the Marcos dictatorship.

"The names of priests, nuns, and lay workers who died during martial law are reminders that the church has a big role in guarding civil liberties," said Redemptorist priest Teodulo Holgado.

About 4,000 policemen were deployed around Manila to ensure order during the protest rallies.

Police spokesman Benigno Durana earlier warned that communist rebels were out to sabotage the demonstrations.

Marcos placed the Philippines under martial law on Sept. 21, 1972.

His rule was known for human rights abuses, including the torture and killings of activists, illegal detentions, and enforced disappearances.