Philippine diplomat comes to the defense of Australian nun, saying what has occurred 'brings shame to our country' 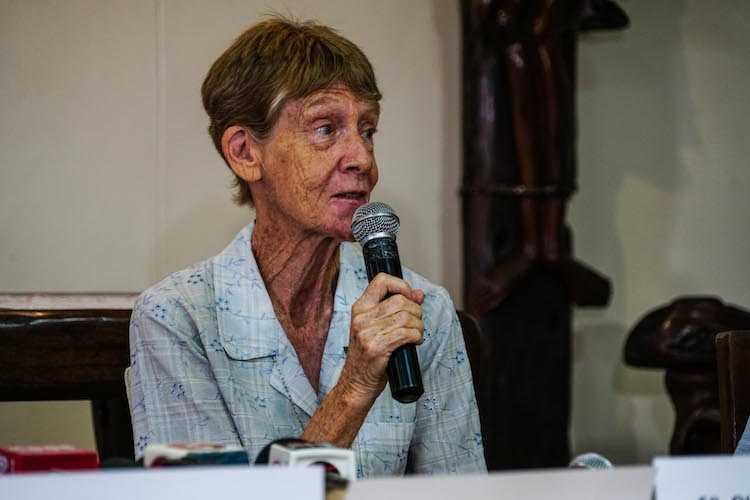 Sister Patricia Fox speaks before members of the media on April 26, a day after the Philippines Bureau of Immigration revoked her missionary visa. (Photo by Jire Carreon/ucanews.com)

Philippine religious leaders have warned that the Philippine government is trying to silence church people who are critical of President Rodrigo Duterte's administration.

They said the arrest, detention, and impending deportation of Australian missionary nun Patricia Fox "is part of a systematic move to silence the church."

Speaking before a media briefing on April 26, Redemptorist priest Oliver Castor said the government has been trying "to stop the church's work with the poor."

The priest, a member of the Rural Missionaries of the Philippines, said what the government did to Sister Fox was similar to what the late dictator Ferdinand Marcos did during his reign.

The former dictator deported foreign missionaries who exposed human rights abuses by the military in the provinces during the years of martial law.

The Philippines' immigration bureau has revoked the missionary visa of Sister Fox this week due to her alleged involvement in partisan political activities.

The Australian nun who belongs to the international Catholic missionary congregation Sisters of Our Lady of Sion, said what she went through "is an attack to the whole church."

The 71-year-old Sister Fox faced the media a day after the Bureau of Immigration forfeited her missionary visa and ordered her to leave the country in the next 30 days.

The nun said she was surprised by the decision of the immigration bureau. "I hope there is a due process so I can explain what is missionary work," she told the media.

In defense of Sister Fox

An official of the Duterte administration has, meanwhile, come to the defense of the Australian nun.

Teddy Locsin Jr., the Philippines' permanent representative to the United Nations, deplored the decision of the Bureau of Immigration to revoke Sister Fox's missionary visa.

"Nuns can do no wrong," said the diplomat in post on Twitter. "This is wrong and brings shame to our country," he said.

"Now we are afraid of an old nun. What does that say about national stability? And a nun working with aborigines," added Locsin.

He said the nun poses no threat to the country because she is only preaching Christianity, not "Marxism-Leninism with Chinese characteristics."

"If any alien comes here to preach the latter, I'll fu*cking shoot him," said Locsin.

"[The] nuns can do no wrong and without them at [the 1986 uprising] your daughters would be sex slaves of the drivers of Marcos generals," said the official.

Attack on the mission of the church

Sister Fox said that as a Christian, her mission is "to bring God's Kingdom to the here and now."

The immigration bureau said the nun is free to return to the country anytime as a tourist, but Sister Fox said it would be difficult for her to continue her work as a visitor.

"It's difficult to continue the missionary work if you are a tourist. First, we are nuns and we are assigned here not as a tourist," she said.

Father Castor said the attack on Sister Fox is an "attack on the mission of the church."

"This is a call to the leadership of the church in the Philippines, let us speak out. Let us not just take this sitting down. By all means let us assert our right," said the priest.

He said what happened to the Australian nun is a "violation of the right not only of [Sister Fox] but also that of church people who promote justice for the poor."

"We don't see any reason why this is being done except to stop any criticism against the government," he said.

"This is clearly religious persecution of those doing their mission and apostolate to the poor," added Father Castor.

In a statement, the Association of Major Religious Superiors in the Philippines expressed its "solidarity" with Sister Fox in her work of "proclaiming the good news of salvation and liberation."

The influential organization of heads of the country's religious congregations said what happened to the nun "is harassment of an advocate of the rights of the poor."

"We demand that the rights of [Sister Fox] be respected," read the group's statement. "Let the government agencies ... not hamper the prophetic work of our foreign missionaries," it added.

Duterte has admitted that he ordered that the nun be investigated for alleged "disorderly conduct" because of her reported participation in protest activities.