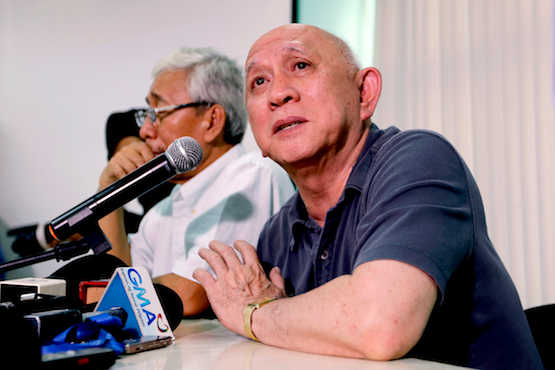 Philippine rebel negotiator Fidel Agcaoili holds a rare interview in Manila June 2 to brief journalists on the prospects of the peace process under the administration of incoming president Rodrigo Duterte. (Photo by Joe Torres)

Philippine communist rebels called on the Catholic Church to play an active role in the long-stalled peace process once it resumes with the government of incoming President Rodrigo Duterte.

"We would encourage the church to play a role," said rebel negotiator Fidel Agcaoili in a rare interview in Manila on June 2.

The rebel leader noted the role Catholic priests, nuns, and even bishops played in facilitating the release of captured government soldiers in recent years.

"Third-party facilitators should be around to ensure the safety of [prisoners of war] and the custodial forces," Agcaoili told ucanews.com.

He said there were proposals for church leaders to sit as observers during the negotiations. "I supposed the church can be harnessed," he said.

Agcaoili said "there are many progressive church people from different denominations" who can help in the process, especially if the government grants a general amnesty for rebels.

"Church people can stand as guarantors, like guarantee for the release of rebel consultants," he said.

The rebels are optimistic that preliminary talks with the government will be held sometime in July after Duterte is sworn to office June 30.

Exiled rebel leader Jose Maria Sison told journalists in an interview with journalists via Skype that he expects to go home and end nearly 30 years of exile next month.

"I want to visit in July or August to hold serious talks with President Duterte," said Sison.

Sison, who was imprisoned by former dictator Ferdinand Marcos, went on exile in Europe in 1987 after peace talks with the government of former President Corazon Aquino failed.

Aside from asking for the release of political prisoners, the rebels are also asking Duterte to implement "democratic reforms that would lead to national industrialization and genuine land reform."

Sison said the removal of American military forces from the Philippine territory will form part of the rebels' demands during the talks.

Nardy Sabino of the Promotion of Church People’s Response, an influential ecumenical organization of church leaders and lay people, welcomed the impending resumption of talks.

"Church and religious organizations have been pressing the government to resume the peace process and seek a long-lasting solution to the armed conflict," he said.

Sabino, however, said the church should monitor the outcome of talks, adding that Duterte’s promise to release political prisoners is only a requisite for the talks to start similar to what happened in previous negotiations.

"The real deal is for the church to challenge both the government and the rebels to come up with policies and agreements that will benefit the largest number of Filipinos," he said.

Agcaoili assured that proposals made by some church leaders in the past are being considered by the rebels.

He said church leaders can also submit to the rebels issues that they want raised with the Duterte administration during the talks.

"The church can continue with their advocacies," said the rebel leader, adding that contentious issues like the death penalty and reproductive health concerns can be set aside for future discussions.

"Those that can be attended to must be addressed so that we can have the beginnings of a more progressive Philippine society," said Agcaili.

Peace negotiations between the government and the National Democratic Front hit an impasse in 2011, with both parties pushing for preconditions before the start of another round of formal talks.

In 2013, attempts to resume the talks failed after the rebels demanded the release of rebel consultants in jail and more than 500 political prisoners around the country.

In 1999, the government and the National Democratic Front signed a deal on "respect for human rights and international humanitarian law," but failed to sign an agreement on socio-economic reforms.

The Philippines military estimates the country's communist movement has about 4,000 armed men under its command, compared with more than 26,000 at its peak 30 years ago.

Meanwhile, political prisoners in the Philippines have welcomed incoming president Rodrigo Duterte's announcement that he would release suspected rebels ahead of the resumption of talks with communist-led insurgents.

"I will release prisoners even before the resolution of talks, in good faith," he said.

Jazmines said the release of all political prisoners would pave the way for the resumption of talks.

— Mark Saludes contributed to this report.