A soldier keeps watch during a military offensive against terrorist position in the southern Philippine city of Marawi. (Photo supplied)

The largest Moro rebel group in the southern Philippines has declared its support for a "fatwa" against violent extremism earlier declared by a senior Islamic religious leader in Mindanao.

Sheik Abehuraira Abdulrahman Udasan, mufti of the Bangsamoro in Mindanao, issued the "Shariah ruling," or "fatwa," against the entry and spread of violent radicalism or extremism" in any part of the region.

The "fatwa" states "an urgent need to fight violent extremism or radicalism, in compliance with the injunction of the Quran and the Prophetic Tradition."

Terrorist gunmen who claim to have links with the so-called Islamic State attacked Marawi on May 23 and continue to hold parts of the city.

The rebel group said radicalism "has no basis whatsoever in any of the teachings of Islam," adding that terror groups have been "creating intrigues and are sowing terror."

The issuance of the "fatwa" came as the Philippine military announced that government forces continue to gain ground in Marawi. 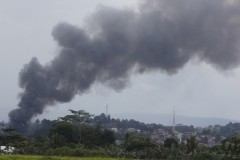 The ongoing clashes have already resulted in the death of 337 terrorist gunmen, 82 government forces, and at least 44 civilians.