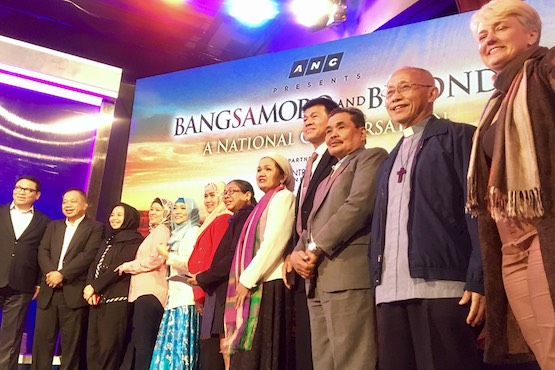 Representatives of various sectors, including Moro rebels and the Catholic Church, pose for a photograph on the sideline of a forum on the prospects for peace in Mindanao in Manila on Oct. 5. (Photo by Inday Espina-Varona)

Failure by the Philippine government to pass a law for broader autonomy for Muslims in the southern part of the country will fuel Islamic extremism, a rebel leader has warned.

Iqbal said the failure of the previous administration to pass the promised legislation is partly behind the rise of groups claiming to have links with the so-called Islamic State.

"The reality is there is a lot of frustration, not just among the youth but even among older people," said Iqbal in a forum in Manila on Oct. 5.

"A law on self-determination is not a cure all, but it can be an antidote to violent Islamism," said the rebel leader, who is the MILF's representative to the transition body that oversees the implementation of a 2014 peace deal with the government.

The landmark agreement requires the passage of law that will allow an expanded autonomous Muslim region in Mindanao under a parliamentary system of government.

The deal also sets down a mechanism for a transition body to craft policies on revenue generation and wealth sharing, power sharing with the central national government, end of hostilities and eventual demobilization of armed rebel units.

In an interview with ucanews.com, Iqbal said the current political set-up of Congress is a boon for efforts to pass a law on autonomy.

"Unlike the previous administration, where there was so much negative statements from various sectors, this government has been very supportive," he said. Iqbal also noted that the Duterte administration has enough time to pass the bill, unlike the previous government that had only a year to craft the law.

Jose Lorena, a member of the transition body, said the measure should pass Congress by May 2018 to give autonomy a chance to work before the federalism initiative of Duterte is launched in 2019.

Referring to the 2014 peace deal, Lorena said Filipino Muslims view the non-implementation of autonomy as a betrayal.

Emma Leslie, executive director of the Center for Peace and Conflict Studies, praised Duterte's commitment to prioritize the peace deal with Moro rebels in Mindanao.

"There has never been a more opportune time to bring the Bangsamoro together," said Leslie.

Retired general Emmanuel Bautista, an undersecretary for security under the Office of the President, said the proposed basic law for Muslims, can ease unrest in the southern Philippines and free resources for other security concerns.