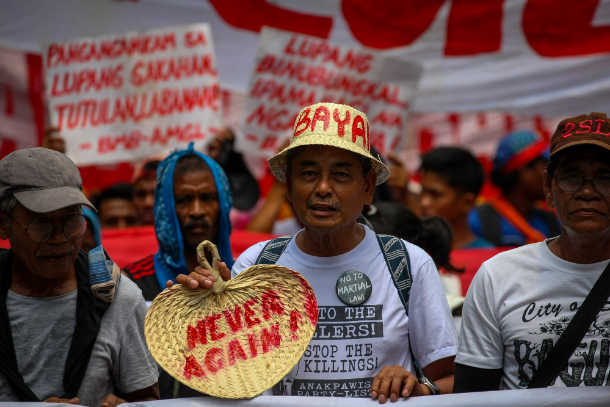 Farmers and workers march in Manila in September to protest the alleged human rights abuses committed by the administration of President Rodrigo Duterte. (Photo by Jire Carreon)

The re-election of the Philippines onto the United Human Rights Council last week has drawn conflicting responses from the country's church leaders and human rights activists.

For one Catholic bishop, the election was "very ironic yet inspiring."

Another said it was not deserved because of alleged human rights abuses committed by President Rodrigo Duterte's administration.

"Now we have to prove ourselves that we value lives more than any material thing," said Bishop Ruperto Santos of Balanga.

He said Filipinos should now be "serious and true for the promotion of human rights [and the] respect and preservation of human lives."

Membership of the U.N. Human Rights Council should serve as a "challenge" for the country to improve and work for the wellbeing of people, he said.

Bishop Arturo Bastes of Sorsogon, however, said the Philippines does not deserve a seat on the council.

"I find it strange and ironic," he said, adding that those who voted to include the country on the council made the "wrong decision."

Despite opposition from Human Rights Watch, the Philippines was re-elected onto the 47-member United Nations Human Rights Council for another three-year term from 2019 to 2021.

In a statement, the Philippine government said the re-election was recognition of its stance on the protection of human rights and zero tolerance against abuses.

"The president's campaign against illegal drugs, corruption and criminality has, in effect, been acknowledged by the international community," said Panelo.

The Philippines received 165 out of the 192 votes cast, the second lowest overall and the lowest — along with Bahrain — in the Asia-Pacific region.

The country's Commission on Human Rights welcomed the country's re-election, saying it puts pressure on the Philippine government to address numerous allegations of human rights violations.

"The Philippines' credibility to be part of this body rests on its ability to effect actions that will concretely address these allegations," read a statement from the commission.

Manila Auxiliary Bishop Broderick Pabillo agreed, saying that because the Philippines is part of the council, "we can now demand more respect for human rights from the government."

Human rights group Karapatan said the re-election "does not absolve the Duterte government of its rights violations against the Filipino people."

Spokeswoman Cristina Palabay said it "does not erase the thousands killed in its murderous drug war."

Opposition legislators said the government's claim that the Philippines "won a seat" on the council was "misleading and hypocritical."

"After constantly attacking the U.N. human rights body for raising its voice against the killings ... the Duterte government shifts gears and is now lauding the council," noted Senator Risa Hontiveros.

She said it is "duplicity at its worst."

Leonel Abasola contributed to this report.