Philippine protesters force mining company to back off 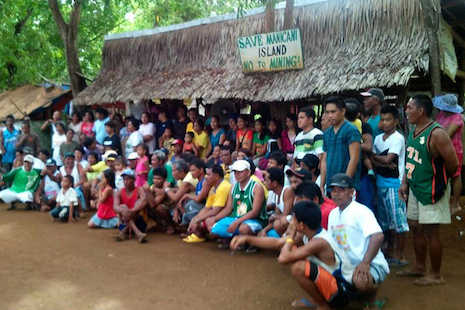 Tension rose on Wednesday morning after residents of Manicani, a small island in Leyte Gulf in the central Philippines, formed a human barricade to prevent a mining company from transporting nickel ore stockpiles off the island.

"The community was shocked when a barge arrived this morning and started to unload heavy equipment," said Fr Dennis de Leon, of San Lorenzo Ruiz parish in Manicani.

The priest told ucanews.com that mining operations on the island have been suspended "due to its adverse effects to the environment."

In July, violence erupted on the island when a truck owned by the Hinatuan Mining Corp. plowed through a human barricade, killing one person and seriously wounding another.

Protesters also claimed that policemen, who were guarding the mine, shot at the barricade.

Opposition by residents to mining operations has been going on for years after Hinatuan acquired rights to mine in Manicani in 1987.

The mining company stopped operations in 1994 due to falling nickel prices, but resumed in 2001. The government ordered the suspension of operations later in the year due to opposition by residents.

A company official who asked not to be identified said the company is bringing new equipment to the island to examine the grade of nickel ores.

But Primo Morillo, advocacy officer of the social justice group Philippine Misereor Partnership Inc., said testing the quality of the ores "is not needed as even the low grade ones will have to be transported."

"The fact that they are planning to test the quality of the nickel ores unmasks the real reason why they are doing everything to get it despite the suspension order," said Morillo in a statement.

"We are afraid that the mining companies’ brazenness will worsen. But we will not back down, the people of Manicani will stand their ground and will resist mining on this small island we call our home," said Fr De Leon.

The Diocese of Borongan, which covers the island of Manicani, earlier voiced fears that continued mining on the island will result in the "wanton destruction of the environment".

In a statement, priests of the diocese said they "cannot remain deaf and blind to the excesses of mining while our people suffer the consequences of actions not of their own making.”

With only an area of 2,900 acres and no major source of water except rainwater, Manicani communities will be at a disadvantage if mining operations continue, the priests said.