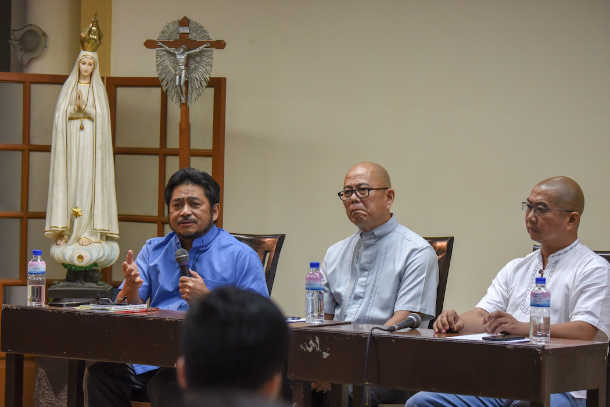 A Filipino priest who relocated in fear for his life has warned fellow priests to take threats seriously but not to be cowed from speaking the truth.

Father Amado Picardal, a Redemptorist priest, said his life has been in danger since he criticized killings linked to the government's anti-narcotics drive. "I became a target of an assassination attempt by a death squad," said the priest. He said he was fortunate because he received advance information about the plot.

Admitting his concern for his personal safety, Father Picardal sought a transfer, but continued speaking out against the killings. "I am not afraid to die but I will not make it easy for them to kill me," he said. Last week, three Filipino priests claimed to have received death threats for criticizing President Rodrigo Duterte's policies.   Bishop Pablo Virgilio David of Kalookanhas also reported receiving threats after speaking out against killings in his diocese. "I hope that there will be more bishops willing to risk their life for their flock," said Father Picardal. He described the threats as a "manifestation of the evil that reigns in society." Asked what the Church should do in the facet of such threats, Father Picardal said it should "vigorously exercise its prophetic mission." He said there is a need to "awaken the conscience of people and society" as the Church should be a "beacon of hope" and "act towards the transformation of society." Earlier, Cubao Diocese in the Philippine capital expressed concern over threats received by several priests. "These threats to the lives of our shepherds are not empty nor unfounded," said Bishop Honesto Ongtioco, adding that this situation demands a "witness to our faith ... to be prophets and speak against all kinds of injustice." A bishops' conference official, meanwhile, urged priests and bishops who have received threats not to be afraid despite attacks on the Church and the clergy. "Even with threats or offensive words, we priests must be firm in our Catholic faith, and faithful to our calling," said Bishop Ruperto Santos of Balanga, head of the Episcopal Commission on Migrants and Itinerant People. "As priests, our lives are for the Church, for God's people. This is our calling, we just fulfill God's call," he added. In a statement after it was revealed that several priests had received threats, Duterte said he did not care if priests ended up getting killed.