It will be a time of reckoning for the human rights violator, says staunch critic of the president's war on drugs Philippine President Rodrigo Duterte gestures as he accompanies some of his party's senators slated for next year's elections to the Commission on Elections in Manila on Oct. 8. (Photo: AFP)

A Catholic priest in the Philippines has ridiculed President Rodrigo Duterte’s plan to retire from politics, saying it would be a time of reckoning for his alleged crimes against humanity.

Divine Word Father Flavie Villanueva, a staunch critic of Duterte’s drug war, said everyone looked forward to retiring except those who have violated human rights.

“After years of sweat and toil, to retire is one of the most beautiful things one looks forward to enjoy. But for those who have misused their time and violated the rights of others, retiring will be a pitiful experience or a day of reckoning,” Father Villanueva told UCA News.

The clergyman, whose criticism of the war on drugs led to the filing of a sedition case against him by the president’s allies, wished him well as he prepares to face a trial in the International Criminal Court (ICC) for presiding over the brutal war on drugs that has killed thousands in the country.

In September, the ICC ruled there was a reasonable basis to proceed with a full investigation into Duterte’s alleged crimes.

“As you retire and prepare, pray for the thousand lives and the bloodbath you have ordered and shunned. For if you’re thinking that you could find a way out of the ICC’s prosecution and justice, I vow that God’s justice, though grounded in mercy, doesn’t sleep, nor does it ever retire,” Father Villanueva said.

Prepare NOT to erase, fabricate and bury or exhume the dead only to bury them elsewhere

He advised Duterte not to bury evidence or threaten potential witnesses in the ICC trial.

“Prepare NOT to erase, fabricate and bury or exhume the dead only to bury them elsewhere. For there are true records, substantial and physical evidence that will show and tell how you planned and orchestrated the killings while still a mayor and even as president of the republic. Remember how with your blotted ego you even admitted to your only sin — extralegal killings,” the priest said.

In 2018, Duterte admitted his only sin was extralegal killings. “I told the military, what is my fault? Did I steal even one peso ... My only sin is extrajudicial killings,” Duterte told the press.

Father Villanueva said that Duterte might retire but God’s justice would not. He recalled listening to a widow whose husband was killed by alleged policemen in civilian clothes. 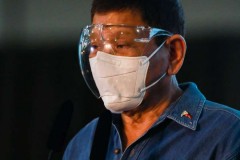 “She was wailing the words, ‘Where are you, Lord?' Why is it as if the heavens are locked and deaf to our plea and prayers?'” Father Villanueva told UCA News.

“I haven’t seen the widow since the decision of the ICC to open a formal investigation was announced. Now I want to see, hug her and say, ‘Your prayers have always been heard. Mr. Duterte is retiring and preparing for his doom.’”