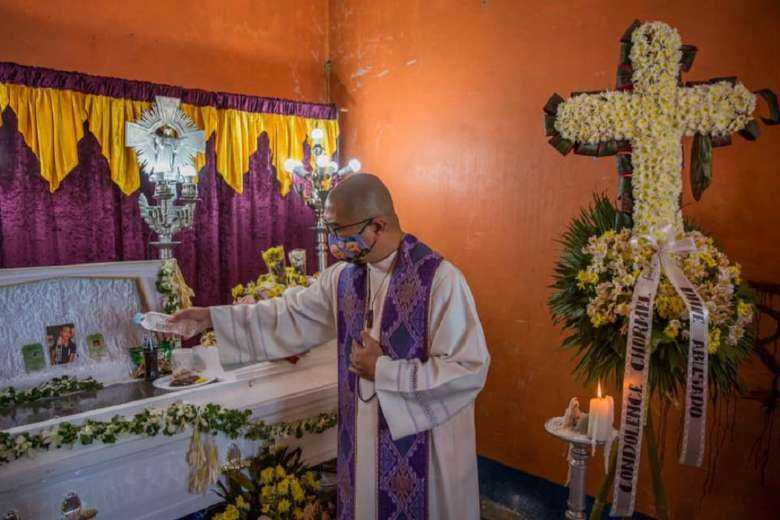 A Catholic priest has launched a scathing attack on Philippine President Rodrigo Duterte, accusing him of breaking an election promise to oppose China’s claims on territory in the South China Sea also claimed by Manila.

Society of Divine Word Father Flavie Villanueva called Duterte “inutile” and a “liar” for comments made on May 5 in which he denied having promised Filipinos during his 2016 election campaign that he would fight against China’s claims over the disputed Spratly Islands and Scarborough Shoal.

The islands are located in what Filipinos call the West Philippines Sea.

Responding to the denial in a social media post, Father Villanueva pointed to comments Duterte made during a presidential debate in 2016 in which he claimed that he would go to the Spratly Islands or Scarborough Shoal and plant the Philippine flag there.

“I will ride a jetski, taking with me the Philippine flag, then I will go to the airport there and I will plant it. Then I will say, ‘This is ours and do what you want with me. It’s up to you,’” Duterte said during the debate.

Father Villanueva called Duterte’s election comments a “clown’s promise” and that his May 5 denial showed him to be “inutile and a liar.”

Who is lying? Who sold our country to the Chinese? Mr. Duterte, if you are awake, just go back to sleep

He also chided Duterte for not acting on a 2016 ruling by the Permanent Court of Arbitration in The Hague invalidating China’s claim over the West Philippine Sea.

“Who is lying? Who sold our country to the Chinese? Mr. Duterte, if you are awake, just go back to sleep. You red-tag … lawyers, peasants and even priests and religious as communists. Yet you play host to the biggest communist leader in the world and even give away our land and seas to him,” Father Villanueva said in his post.

The priest is also a staunch critic of Duterte’s war on illegal drugs.

The priest went on label Duterte’s presidency as the “deadliest presidency” in the country’s history due to the drug war deaths and alleged mishandling of pandemic resources.

“We are allowing one dead virus, with no brains, just a speck of protein, plus one man who is a considerably flawed character, to destroy the best of the Filipino race,” he said.