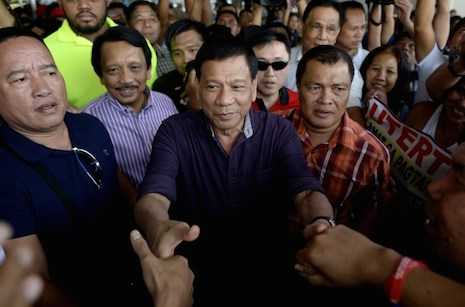 Davao mayor Rodrigo Duterte, center, shakes hands with supporters outside a Manila hotel Nov. 30 after announcing he would run for president. Duterte drew criticism for cursing the pope for worsening traffic in the Philippines. (Photo by AFP)

A controversial Philippine mayor, running for president in next year's elections, has drawn the wrath of Catholic bishops after he cursed Pope Francis in a speech on national television on Nov. 30.

Davao City mayor, Rodrigo Duterte, drew flak after using offensive language to criticize Pope Francis for causing a traffic jam in Metro Manila during his visit to the Philippines in January.

"Do you know that it took us five hours from the hotel to the airport. I asked why? The roads were closed," said Duterte.

"Vulgarity is corruption. When we find vulgarity funny, we have really become beastly and barbaric as a people," said Archbishop Socrates Villegas of Lingayen-Dagupan, president of the bishops' conference.

"When a revered and loved and admired man like Pope Francis is cursed by a political candidate and the audience laugh, I can only bow my head and grieve in great shame. My countrymen have gone to the dregs," said Archbishop Villegas in a statement.

"Corruption is indeed a great scourge of Philippine politics ... What the world desperately needs now is leadership by example," he said.

"Mayor Duterte, you can say all you want about politicians but you don't curse my Pope Francis! #defendthepope," said presidential spokesman Erwin Lacierda in a tweet.

Duterte later said it was not Pope Francis he was cursing but the inefficiency of the government.

The mayor, who is known for being a tough talker, said he would still not invite the pontiff to the Philippines if it meant Filipinos would suffer.

"If he asks me, 'are you inviting me again?' If people will suffer, can I say no this time," Duterte said in a radio interview.

"I don't crave for ratings, I do not need praises I will not die if I don't become president ... If you don't like my character, the solution is do not vote for me," he said.

New York-based Human Rights Watch has been calling for an investigation into whether Duterte — nicknamed "Dirty Harry" for his ruthless stance on crime — was involved in alleged summary executions of suspected criminals in Davao City during his time as mayor.

Retired Archbishop Oscar Cruz of Lingayen-Dagupan warned against Duterte's reported threats to kill criminals once he is elected.

"There is a big difference between being righteous and thinking and acting like God," the archbishop told reporters after Duterte declared his presidential candidacy on Nov. 30.

"Taking justice into one's hands makes one think like God and act like a dictator," the prelate said.

"Time" magazine dubbed the Duterte, 70, as "The Punisher" in a 2002 article for his alleged connection to reported summary executions of suspected criminals in Davao City where he has been mayor for 22 years.