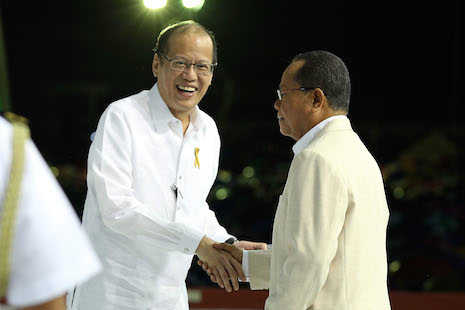 Philippine President Benigno Aquino openly solicited the support of the country's biggest Catholic charismatic movement to support his administration and his candidates in next year's presidential elections.

"Next year, we will again be at the crossroads. I hope we become guides of our fellow men in choosing the right leader," Aquino told a gathering of thousands of El Shaddai Charismatic Renewal Movement members on Aug. 23.

"I am hopeful that we will not veer away from the good things we have started in order to achieve our goals," the president said at the overnight celebration of the movement's 31st anniversary and the 76th birthday of its founder, Mariano Velarde, also known as Brother Mike.

Velarde, a televangelist who is known for having held considerable sway over politicians and election outcomes for nearly three decades, established the El Shaddai in 1984.

The group, which has since become the largest of the new generation Christian movements in the country, claims a following of 3 to 8 million Filipinos, although independent estimates put it at a much lower figure of 2 million.

El Shaddai is one of the many Catholic charismatic movements that emerged in the 1980s, offering spiritual renewal seminars, which have evolved under different names.

In documents released by WikiLeaks in 2010, the U.S. embassy in Manila considered El Shaddai and the Iglesia ni Cristo to be two of the most politically influential groups in the Philippines, with a combined voting power of "2 to 3 million."

Velarde has always maintained that there is a "Catholic vote" in the majority Catholic Philippines.

During the 2013 midterm elections, Velarde's El Shaddai and dozens of other smaller Catholic lay organizations banded together to form the "White Vote movement" to campaign for "pro-Church candidates."

"We endorse, we don't impose. We just encourage [members] to go along with us, what is best for all of us," Velarde told ucanews.com in a 2013 interview.

"It's time to let the public know that there's such a [Catholic] vote," he said.

Politicians who run for election usually flock to the El Shaddai's weekly gatherings during the campaign season to woo the group, which is widely perceived to vote as a bloc during elections.

Aquino, in his Aug. 23 speech, lauded the El Shaddai founder for being "the source of strength and inspiration for millions of our countrymen."

The president called on El Shaddai followers "to stand for what is right and just."

"If we are always prepared to fight corruption and if we give priority to the commonweal rather than our own interests, the seeds we have sown will grow and flourish," the president said.

Velarde was not available to comment on the president's statement.