A fisherman paddles his wooden boat next to houses and palms covered in mud and ash due to the eruption of Taal volcano, in a village called Laurel in Batangas province on Jan. 16. (Photo by Ted Aljibe/AFP)

Amid the ongoing volcanic eruption near the Philippine capital Manila, a Catholic prelate has warned people against spreading "fake news" on social media.

Archbishop Gilbert Garcera of Lipa lamented the spread of "fake news," which he said gives a wrong depiction of the situation in affected communities and causes confusion."Let us get information from credible sources because a lot of fake news is emerging," the prelate said in a homily during Mass attended by volunteers in the Church’s relief efforts.He said his name was even used by some groups to ask for donations. The archbishop said the archdiocese's social action body is the only recognized entity in the archdiocese dealing with donations.The Philippine Institute of Volcanology and Seismology has also denied social media posts of what was supposed to be an ongoing "hazardous explosive eruption" of the volcano.
Related News 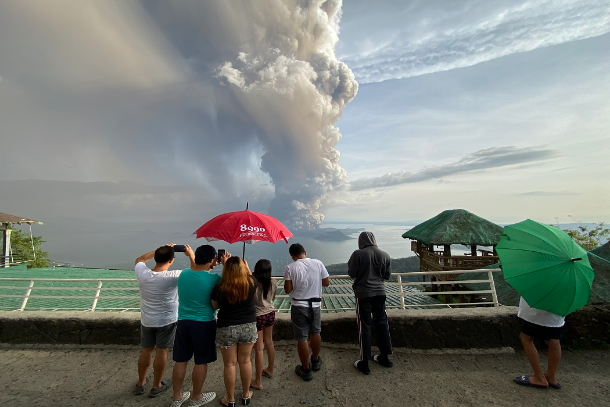 The government agency said Taal volcano, which is 60 kilometers south of Manila, was still under Alert 4, which means a catastrophic "hazardous explosive eruption," may happen soon."Faith is service to our fellows. You receive faith, you share faith," said Archbishop Garcera, adding that the disaster should be a "moment of faith.""Aside from water and food that the government provides, what the Church can also give is strengthening of faith," he said.Lipa Archdiocese, which has been working closely with various government and non-government aid groups, has already converted several church institutions into evacuation centers.Meanwhile, the Prelature of Marawi in the southern Philippines announced that it will join the campaign to help people affected by the eruption."We will dig deep into our pockets and give for our ... brothers and sisters until it really hurts," said Bishop Edwin dela Pena of Marawi.In the aftermath of the five-month conflict the city endured in 2017, churches across the country sent donations to Marawi to help people displaced by the fighting.The Catholic Bishops Conference of the Philippines earlier called on dioceses and parishes to help residents displaced by the volcanic eruption.On Jan 16, Taal volcano showed signs of calming down, but authorities warned that the danger of bigger eruption remained high."We are analyzing what this seeming calm … means," said Maria Antonia Bornas, chief science research specialist at the Philippine Institute of Volcanology and Seismology.Although the volcanic activity had "generally eased to a weak emission of steam-laden plumes" seismologists had recorded more than 100 tremors in the past 24 hours.As of the last count, more than 53,000 residents had fled their homes around the volcano, but thousands more have refused to leave their communities.Taal volcano has erupted more than 30 times in the past five centuries, with the most recent being in 1977.