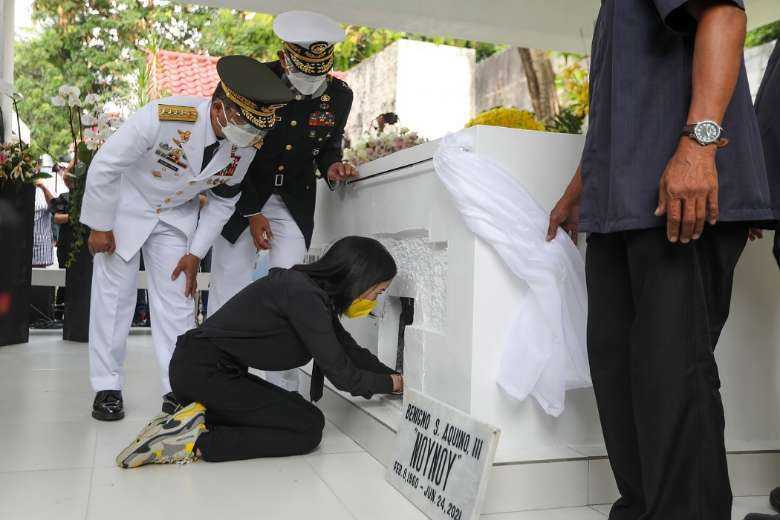 Kris Aquino (center) places the urn of her brother, the late president Benigno Aquino, inside a tomb during his funeral in Manila on June 26. (Photo: AFP)

A Catholic bishop challenged the Philippines to bring back good governance in a thinly veiled attack on President Rodrigo Duterte during the funeral Mass for former leader Benigno Aquino.

Lingayen-DagupanArchbishop Socrates Villegas and KalookanBishop Pablo Virgilio David celebrated the Mass with several Jesuits and clergymen who were friends of the Aquino family on June 26 in Quezon City.

They joined the family in bidding the former president farewell in the national Heroes’ Cemetery where his ashes were interred with his parents, assassinated senator Benigno Aquino, Jr. and former president Corazon Aquino.

Aquino died on June 24 from renal failure and complications caused by diabetes.

Archbishop Villegas, former secretary of late Manila archbishop and People Power icon Cardinal Jaime Sin, delivered the homily that many Catholics saw as a political statement aimed at the country’s next election.

“Eulogies have been written and spoken and shared. But the best eulogy tribute we can pay our dear President Noy [Aquino] is to bring back, recover, preserve, safeguard and never to compromise again our dignity as a people and the decency of our leaders as servants, not bosses,” Archbishop Villegas said in his homily.

As he brought dignity and honesty to his service to the nation as our president, he preserved that dignity after his retirement

The prelate lamented how good and decent governance has been dying in the Philippines since Duterte came to power.

“The flags at half-mast are not only for a dead president but for the dying decent governance. We are his [Aquino’s] boss. He lived by it. We are grateful for it. The greatest among you will be your servant, says the Lord,” Archbishop Villegas said.

The archbishop praised Aquino for his silence despite criticism of his administration by Duterte and his allies.

He described Aquino’s silence as “dignified” like a true statesman now rare and forgotten in Philippine politics.

“His silence after his term was a silence of dignity. As he brought dignity and honesty to his service to the nation as our president, he preserved that dignity after his retirement. It was the silence of a noble statesman now rare and forgotten,” Archbishop Villegas said.

“[He] died as he lived. He served without fanfare. He abhorred power trappings and power tripping. He slipped away quietly … disturbing no one,” he added.

The archbishop said Aquino leaves behind a country having to endure violence and vulgarity.

“He [Aquino] is where sickness can no longer threaten; where fake news has no place and trolls are dead … We who are left behind sighing, mourning and weeping in this valley of tears must still toil under the heat of the sun. We still have to endure mediocrity and violence and vulgarity and treachery,” he said.