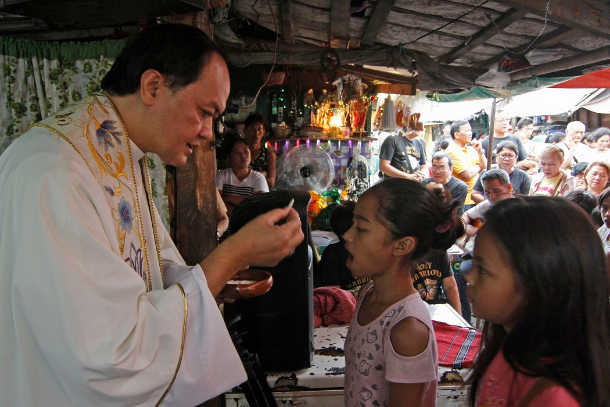 Bishop Pablo Virgilio David of Kalookan celebrates Mass in January in an urban poor community in his diocese where drug-related killings are common. (Photo by Vincent Go)

A Philippine bishop who has received death threats for criticizing the government's bloody narcotics crackdown has vowed to continue speaking out against it.

Bishop Pablo Virgilio David of Kalookan in the Philippine capital Manila said while he fears for his safety, he "fears more for children and the poor victims of this drug war."

He said the poor have become the most "vulnerable" in the illegal drug trade because of their "desperation and hopelessness."

The government's "war against illegal drugs" has become "immoral and unthinkable and so desperate," the vice president of the bishops' conference, said.

The campaign would have been more successful had enforcers respected the provisions of law that guarantee respect for human rights, he added.

Early in his presidency in 2016, Rodrigo Duterte promised to put an end to illegal drugs within three to six months.

After three years, the campaign against narcotics has resulted in the killing of up to 20,000 suspected drug users and peddlers, according to rights groups.

Bishop David said he will continue working with local officials in his diocese to help community-based rehabilitation of drug addicts.

"We’re not anti-government, we have found a lot of good people in the local government," said the prelate.

He said, however, that even volunteers in his partnership with the local anti-narcotics council have received death threats.

This week, rights groups honored Bishop David with the "Ka Pepe Diokno Human Rights Award," named after a late Filipino human rights defender, for his defense of the rights of the poor.

In a message read during the ceremony, the prelate asked for forgiveness for not attending.

"Well-meaning friends who worry for my personal safety had advised me not to take these threats to my person lightly," the bishop said.

He said he did not want to "unnecessarily endanger the lives of those who would accompany" him to the event.

Bishop David, however, said threats are "part of the hazards" of being a priest and a bishop.