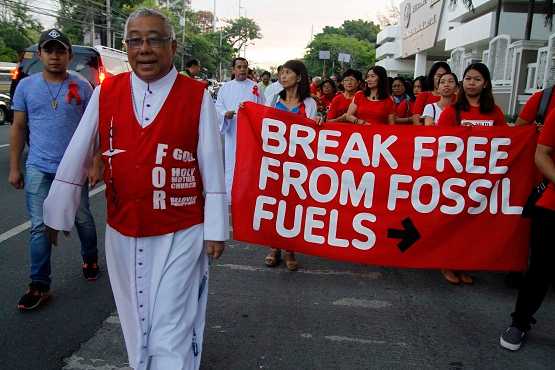 Archbishop Ramon Arguelles of Lipa leads a 'prayer march' against the building of coal plants in the country, specifically in the city of Batangas, on March 17. (Photo by Jimmy Domingo)

The Catholic archbishop of Lipa in the Philippine province of Batangas is leading a national coalition to oppose the use of coal and other dirty and harmful energy in the country.

"It is immoral to burden future generations with pollution and the cost of mistaken energy choices made today," Archbishop Ramon Arguelles said.
"It is time to end the age of coal," said the prelate during the announcement in Manila on April 6 of "Break Free from Fossil Fuels 2016," a globally coordinated effort to escalate the fight against fossil fuels.
Mass protest actions are also scheduled through May 15 in Indonesia, Nigeria, Brazil, the United States, Germany, and Australia.
In December 2015, world leaders agreed in Paris to limit global warming, but countries like the Philippines continue to put up new coal, gas, oil and other fossil fuel projects.
"It is appalling that there are 17 existing coal plants in the country and 29 more still in the pipeline," said Ian Rivera, national coordinator of the Philippine Movement for Climate Justice.
Lidy Nacpil, coordinator of the Asian Peoples Movement on Debt and Development, said the global climate movement "will be demanding our world leaders to practice what they preach."
Archbishop Arguelles is to lead some 10,000 activists on May 4 in a march to call for a halt to the building of a 600-megawatt coal plant in the city of Batangas, which is part of Lipa Archdiocese.
The Batangas protest rally will come a few days before the country's national elections on May 9.
"We are not campaigning for any personality, but rather, we are challenging candidates to include environmental issues in their platforms of government," said Archbishop Arguelles.
The prelate noted that there was no mention of environmental programs during recent presidential debates.
Reuben Muni, climate and energy campaigner for Greenpeace Southeast Asia, said the future president of the Philippines "should heed the call of the times and usher in a new era free from coal and other dirty forms of energy."
Environmental groups have expressed disappointment at candidates' lack of any clear positions and plans regarding urgent environmental issues challenging the Philippines.
"From what we’ve seen so far, the presidential candidates need a more thorough understanding of environmental issues that have to be quickly addressed," said Naderev Sano, Greenpeace executive director.