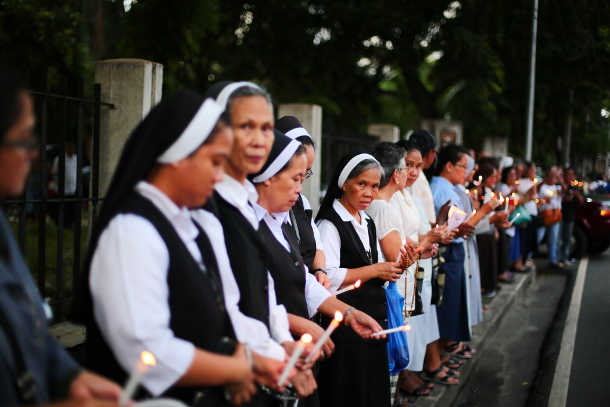 Nuns light candles in Manila on Aug. 6 to show solidarity with Catholic bishops and priests charged with sedition for allegedly participating in a plot to oust Philippine President Rodrigo Duterte. (Photo by Jire Carreon)

A bishop in the Philippine capital has condemned what he described as the silence of Catholics, especially priests and bishops, regarding an upsurge in targeted killings in recent weeks.

Manila Auxiliary Bishop Broderick Pabillo said church leaders "except for some bishops and religious whose flock were directly affected" have been silent. The prelate warned that by keeping silent "we side with the aggressors [and] we give them the liberty to continue their assaults and lies."

"[Because] we allow them the liberty to do wrong once, they would not hesitate to do it again to another, and then to another," said the prelate. Bishop Pabillo made the comments on Aug. 12 in a statement calling for an independent investigation into the wave of violence on the central Philippine island of Negros. He said the investigation cannot be simply left to the authorities, especially soldiers and policemen who have been implicated in the killings. At least 15 people were killed by gunmen in Negros Oriental province last month, following the death of four policemen in an ambush. On March 30, at least 14 others were killed in what authorities described as an armed encounter with security forces. “A bloodbath is now happening in Negros. This cannot go on. The killings must stop," Bishop Pabillo said. Human rights groups have reported at least 87 killings of unarmed civilians in Negros province since the government intensified its anti-insurgency campaign in 2017. Bishop Pabillo said that even in the government's war against narcotics lives could have been spared if only people did not keep silent. “If from the beginning the denunciations had come from all quarters since injustice in some areas is an injustice to all, many lives could have been spared," said the prelate. Human rights groups claim more than 20,000 suspected drug users and dealers have been killed in President Rodrigo Duterte's "war against drugs." Regarding Negros, Bishop Pabillo noted that there were "outcries from the four Catholic bishops and other bishops from other Christian denominations in Negros to stop this endless shedding of blood." "But why are bishops of other dioceses silent?" asked the prelate. "Do we have to wait for the killings to spread to other dioceses?" He also lamented the silence of the public over attacks on perceived critics of the government, including several Catholic bishops and priests, charged of sedition. "We all know that the accusation is without basis. We all know that it is legal harassment. We all know that it is a ploy to frighten critics of the government," Bishop Pabillo said. "Why the silence of other church leaders, the academe, and the lay faithful in general. Do we have to wait till the same harassment comes to us?" "Silence is not an option. We have to speak — and now! Defend the innocent. Denounce the aggression. Call the accusations for what they are — lies!" he said.