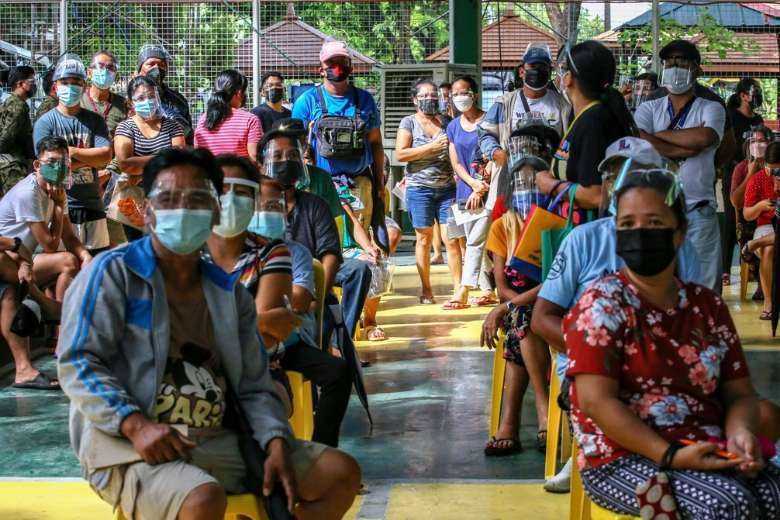 Filipinos line up to receive government cash aid during enhanced community quarantine at a basketball court in Manila on Aug. 11. (Photo: AFP)

A Dominican priest has criticized politicians in the Philippines for launching their campaigns for next year’s polls while people were still suffering due to the coronavirus pandemic.

“While Filipinos still suffer from the adverse effects of the pandemic, some politicians are already mounting their election campaigns. Their advertisements (‘paid for by friends’) clutter the airwaves, television, and social media …,” said Father Rolando de la Rosa, president of the Pontifical University of Saint Thomas Aquinas in Rome, as reported by The Manila Times on Sept. 5.

The filing of certificates of candidacy begins on Oct. 1 and the election process will be underway from Jan. 9 until June 8, 2022.

Father De la Rosa said politicians were taking advantage of their wealth to secure votes through paid advertisements that had helped sell their image like commodities for public consumption.

“They [politicians] know that many of our countrymen vote by name recall, so they want to assure their victory by etching their names in our mind through continuous exposure on various media platforms,” he said.

Father Dela Rosa further urged Filipinos not to believe in surveys that shaped public opinion ahead of elections.

This is why even crooks, thieves and suspected criminals run for public office

“The trouble with surveys is that they present one generalized view of reality and subtly absolutize this as the legitimate view, or worse, the only view we must accept,” he said.

Surveys condition the electorate to vote for candidates who are predicted as winnable regardless of their qualifications or moral qualities, he added.

“This is why even crooks, thieves and suspected criminals run for public office. They no longer worry about their misdeeds being exposed by their opponents. Their advertisers will dismiss those crimes as fake news perpetrated by their enemies, who are in turn labeled as mudslingers,” he said.

Many agree with the Dominican priest’s view on Philippine elections.

“I totally agree with him, particularly the way he depicted the reality in Philippine politics. Those who have the money have more advertisements that result in name recall, while those who do not have the funds cannot win in the elections even if they have a good track record,” John Apil, a professor of politics, told UCA News.

Apil said a politician running for senator’s office is required to spend at least 300 million pesos (US$6 million).