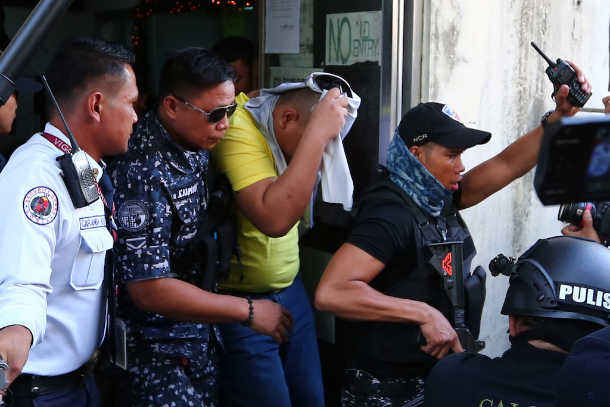 Authorities escort three policemen out of a courthouse on Nov. 29 after they were convicted of killing Kian Loyd delos Santos during an anti-narcotics operation in the city of Caloocan, north of Manila, in 2017. (Photo by Jire Carreon)

A Philippine court has found three policemen guilty of the murder of a 17-year-old student during an anti-narcotics operation.

Arnel Oares, Jeremias Pereda and Jerwin Cruz were sentenced to at least 30 years in prison by a Caloocan court on Nov. 29 in the first conviction of police for extrajudicial killing in the 29-month anti-drugs campaign, according to human rights advocates.

The killing of Kian Loyd delos Santos in Caloocan, north of capital Manila, in August 2017 became controversial after official police reports differed from the accounts of witnesses and footage from closed-circuit cameras.

The death of the Grade 11 student at the hands of police sparked national and international condemnation of President Rodrigo Duterte's "total war" on illegal drugs.

Critics of the president said the death of Delos Santos "underscored the human rights atrocities committed in the name of the bloody war on drugs."

The case stirred up controversy after police claimed that the teenager tried to fight it out with them with a .45 caliber pistol. Witness testimonies, however, disproved the claims. An independent autopsy also showed the boy was shot in the head.

Data from the Children's Legal Rights and Development Center revealed that at least 74 children have been killed in the war on narcotics.

National police spokesman Benigno Durana Jr. confirmed that the police has from 26,000 to 30,000 "deaths under investigation" or DUIs. But he said that not all of the cases were related to anti-narcotic operations.

"It's a lie by some quarters insisting the 30,000 DUIs are related to police operations," he said, adding that the police were "very transparent and truthful, that we have 4,999 [suspects] who died in legitimate police operations."

In a statement, the presidential palace described the guilty verdict against the policemen as "a triumph of justice."

"It shows that this country has a robust judicial system," said Duterte spokesman Salvador Panelo.

Opposition senator Grace Poe, who ran against Duterte during the 2016 presidential race, said the guilty verdict showed that "justice is on hand" for drug-related deaths.

"This is a compelling verdict because it tells us that justice is on hand, not just for the young Kian delos Santos but for the other dubious deaths linked to the drug war," she said in a statement.

In 2017, the legislator spearheaded an investigation into the killings of teenagers linked to drug-related crimes, including the murder of Delos Santos.

The non-government Child Rights Network, the largest alliance of organizations and agencies pushing for children's rights legislation in the Philippines, also welcomed the guilty verdict.

Child rights advocates said the "landmark decision" is an "essential step in the right direction that sends a clear message that ... justice can still be attained in the Philippines.

"The verdict ... is a staunch reminder to all, especially state forces, that what a nation should uphold is the rule of law — and not the monolithic rule of law enforcers," the group said in a statement.

The group, however, noted that it is a "partial victory" because the policemen were not found guilty of charges of planting firearms and drugs despite evidence supporting the charges.

In its decision, the court found the three policemen guilty of the crime of murder but acquitted them of planting evidence on Delos Santos.