Church, rights groups condemn a raid that police claim was a rescue bid to save indigenous children from terrorism 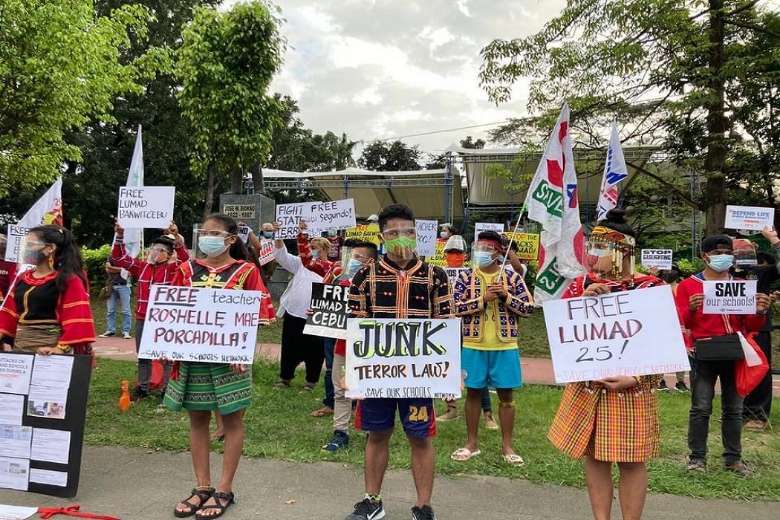 Youths in Cebu province stage a protest calling for the Philippine Supreme Court to rule against a new anti-terrorism law. (Photo supplied)

Rights and church groups in the Philippines have condemned a police raid on a Catholic university during which 25 teachers and young students were taken into custody.

Police say the raid at the  University of San Carlos in Cebu City on Feb. 15 was a “rescue operation” to save students undergoing training as “future terrorists.”

According to reports, those detained included seven adults and 19 minors.

The raid took place at a retreat house on the university’s campus that indigenous people known as Lumads had turned into an educational center.

The Lumads are often accused by the government of being members of the outlawed Communist Party, whose armed wing has led a decades-old insurgency.

Police said they received reports that students were being held captive and indoctrinated for terrorist purposes.

“These students detained ... were being housed in the Catholic school’s grounds to undergo revolutionary training as future armed combatants,” police said.

The Society of the Divine Word (SVD) congregation that runs the university hit back by saying the teachers and students were part of a Catholic Church education program.

“They were at the SVD-owned retreat house … to complete their modular schooling on April 3, 2020, after which they would have returned to their respective indigenous communities,” the congregation said in a statement.

They were staying on campus due to pandemic restrictions in the province, the statement added. “It came as a surprise that reports about minors being rescued surfaced. No rescue was needed as the children were there for their welfare and well-being,” the statement said.

Human rights groups said the raid was an example of how state forces were implementing a controversial anti-terror law giving authorities greater powers of arrest and detention that came into force last year.

“This recent assault is another in a long line of grave harassment and intensified operations that indigenous people have suffered under the Duterte administration," the left-wing Akbayan party told reporters.

Footage of the raid posted by the Save Our Schools Network showed some of the detained children screaming as police took them away.

“They made it appear as if the Church was not taking care of these people all along. They criminalize the helping of indigenous people. This is why the anti-terror law is terrorism itself,” said Jenny Linares in a social media post.