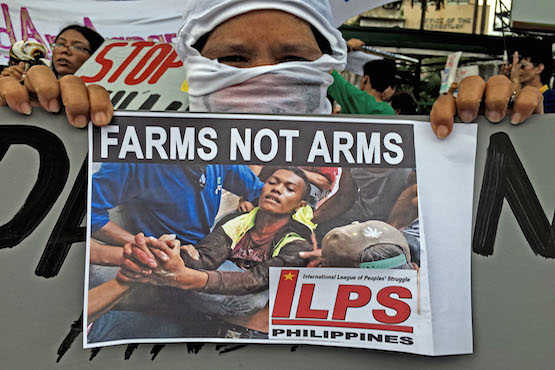 Human rights activists and farmers hold demonstrate outside the Department of Agriculture office in Manila hours after the dispersal of protesting farmers in Mindanao on April 1. (Photo by Joe Torres)

At least three people were killed and up to 30 others injured after state security forces dispersed a "human barricade" of some 6,000 farmers and indigenous people in the southern Philippine province of Cotabato on April 1.

"Three farmers (are) now confirmed dead in a bloody dispersal by police," said Danilo Ramos, chairman of the Federation of Agricultural Workers.

Ramos told ucanews.com that the casualties "were only demanding immediate relief from the government" from the effects of the ongoing drought in the southern Philippines.

"You do not shoot people who are merely asking immediate assistance from the government," he said.

The protesters had blocked the 220-kilometer highway that connects Cotabato and Davao provinces in Mindanao since March 30.

"(The) protesters started throwing stones at [the policemen]," said Cotabato Gov. Emmylou Talino-Mendoza, adding that violence erupted after the farmers attacked the policemen who were out to clear the highway.

But Pedro Arnado, chairman of the Peasant Movement of the Philippines in the Mindanao region, said policemen first used a water cannon to disperse the people but when the farmers stood their ground, rocks started flying from the police lines.

"We told them that all we wanted was relief from the drought, and we would leave," said Arnado. "But the police chief said they would disperse us by force if we did not leave," he said.

"The protesters continued to resist, so the cops opened fire," said Arnado.

"Despite the casualties, the farmers stood their ground and wanted to fight back, but we ordered a withdrawal to avoid more harm from happening," he told ucanews.com.

In a statement, the Philippine National Police said it is investigating the dispersal of farmers in Cotabato province.

Watch this ucanews.com video on farmers protesting in Manila.

The Rural Missionaries of the Philippines, a group of Catholic nuns and priests who mostly work in Mindanao, denounced the incident.

"We hold the administration of President Benigno Aquino responsible for this merciless act," said Sister Francis Anover, national coordinator of the organization.

The nun said "the latest atrocity adds to the long list of immoralities by the Aquino regime against the rural poor."

Anover noted that farmers and indegenous people in Mindanao have already suffered "a long period of gruesome militarization of their communities" due to so-called government development projects that displace the poor.

"We urge church sectors to help and support the peasants’ struggle for land and justice," said the nun.

"It is morally just to support the call for free land distribution to Filipino farmers as it would remove landlessness, hunger, poverty, and injustices in our country," she added.

Father Edwin Gariguez, head of the social action secretariat of the bishops' conference, called on the administration to truly help people in need.

Carlos Conde, Philippines researcher for Human Rights Watch's Asia division, said his organization is "saddened" to learn about the reported violence. "The government needs to urgently investigate the incident," he told ucanews.com.

The National Union of Peoples' Lawyers also expressed "outrage" over what it described as the "inhumane and merciless shooting of unarmed protesting farmers."

"It is uncivilized, disproportionate, and barbaric," said Edre Olalia, secretary general of the lawyers' organization.

With reports from Inday Espina-Varona and Mark Saludes