Ronald dela Rosa hits out at church criticism of police using Bibles, rosaries as props in raids on drug suspects 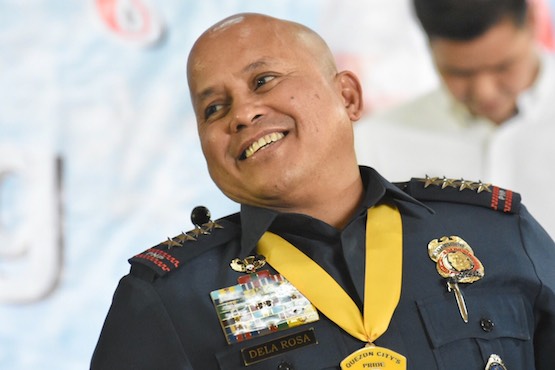 Director General Ronald dela Rosa, Philippine national police chief, has lashed out at priests and bishops who criticized the reported use of Bibles and rosaries as props in the government's re-launched anti-narcotics war. (Photo by Angie de Silva)

Policemen are reportedly showing Bibles and rosaries to drug suspects when they raid their homes in the hope they can persuade them to give themselves up quietly so the police cannot be accused of human rights abuses.

Church leaders, however, warned the police not to use the Bible and the rosary as props.

"Using those religious items during police operations is good only for theatrics," said Father Jerome Secillano of the Catholic bishops' public affairs committee.

National police chief Ronald dela Rosa argued that the bishops and priests have no monopoly on the Bible and the rosary. "Just because you are bishops and priests doesn't mean you are the only ones allowed to carry Bibles and rosaries," he said in media briefing on Feb. 5.

"You don't have a monopoly of the Roman Catholic religion," he added.

Bishop Pablo Virgillo David of Kalookan said the police should instead focus on resolving drug-related killings over the past months.

"Resolving the countless 'deaths under investigation' might be more necessary than [re-launching the anti-narcotics] campaign," said the prelate.

Stricter guidelines for anti-illegal drug operatives were released after President Rodrigo Duterte allowed the police back into the government's anti-narcotics war following a barrage of complaints against the force over an alleged shoot to kill policy.